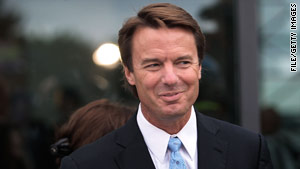 Former U.S. Sen. John Edwards of North Carolina previously denied that he fathered a child with another woman.
STORY HIGHLIGHTS

Washington (CNN) -- Former U.S. Sen. John Edwards of North Carolina has admitted that he fathered a girl with his mistress.

"I will do everything in my power to provide her with the love and support she deserves," Edwards said in a statement.

The former 2008 Democratic presidential candidate previously denied that he was the girl's father.

"It was wrong for me ever to deny she was my daughter and hopefully one day, when she understands, she will forgive me," Edwards said.

"To all those I have disappointed and hurt, these words will never be enough, but I am truly sorry."

Edwards earlier admitted that he had an affair with Rielle Hunter while he was campaigning for the Democratic presidential nomination.

Edwards' campaign paid Hunter $114,000 to make a series of short videos about his presidential campaign, and she traveled extensively with the candidate's entourage.

Hunter gave birth in February 2008 to a baby girl. She is widely reported to have named the girl Quinn.

Edwards denied that he was the girl's father for more than a year, saying the affair was over before Hunter became pregnant.

Now he has admitted it.

"I am Quinn's father," his statement said. "I have been able to spend time with her during the past year and trust that future efforts to show her the love and affection she deserves can be done privately and in peace.

"I have been providing financial support for Quinn and have reached an agreement with her mother to continue providing support in the future."