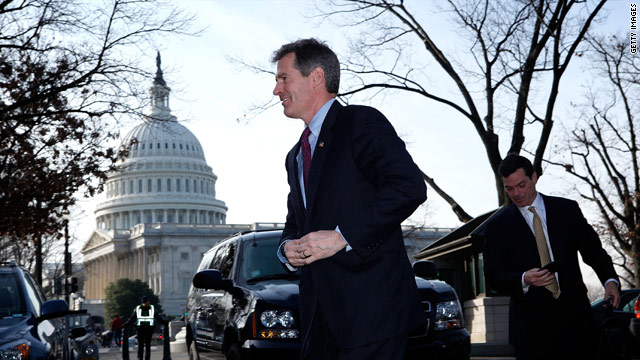 Washington (CNN) -- Massachusetts Sen.-elect Scott Brown arrived on Capitol Hill on Thursday, two days after pulling off a once-unthinkable victory that has bolstered Republicans nationwide and reformulated the political calculus in Washington.

Brown was scheduled to meet with several senior Republican and Democratic senators. During his visit, he took on the aura of a virtual celebrity, surrounded by dozens of reporters, aides, and well-wishers.

Brown, a state senator who defeated Democratic state Attorney General Martha Coakley on Tuesday, is the first Massachusetts Republican to win a U.S. Senate race since 1972. His win stripped Democrats of their filibuster-proof 60-seat Senate supermajority and has forced the Obama White House to reconsider its options for passing a health care bill.

One of the problems with Washington is that "there seems to be no transparency" on health care negotiations and other issues, Brown told reporters.

"People are outraged by that. Just do everything aboveboard. That's what this place is about. This is the best place in the world when it comes to solving problems, and we've kind of lost our way," he added.

McCain, through his "Country First" political action committee, has called on Democrats to seat Brown immediately.

Brown represents "the dreams and the hopes and the frustrations that Americans feel today," McCain said. "They want the kind of leadership that the commonwealth of Massachusetts just sent us."

Brown also met with John Kerry, the senior senator from Massachusetts. In the last week of the heated campaign, Kerry, the Democrats' 2004 presidential nominee, accused Brown supporters of "bullying and threats" and urged Brown to speak out and get his supporters under control.

The two senators had a friendlier exchange Thursday, however, with Kerry expressing hope that Brown will be seated soon.

"I think seating Scott Brown as expeditiously as possible is important. We want to respect the election results," Kerry said.

Asked when he expects to take office, Brown said he is "anticipating sometime next week."

Brown was also slated to meet with both Senate Majority Leader Harry Reid of Nevada and Senate Minority Leader Mitch McConnell of Kentucky.

"It's safe to say on behalf of the Republican conference we are really, really happy to have him here," McConnell said. "He's ready to get to work and we're ready to help him get started."

Also on Brown's schedule: a meeting with interim Massachusetts Sen. Paul Kirk, the man Brown will replace. Kirk, a longtime friend and trusted aide to Kennedy, was tapped to temporarily replace the late senator. Kirk has said he hopes to make the transition as smooth as possible.

Asked for his views Thursday on the suddenly-reeling health care reform legislation, Brown promised to "look at every bill and make a rational decision."

Watch Brown talk to CNN about his thoughts on health care

Brown said that while "everybody deserves some form of coverage," he's "not in favor of the one-size-fits-all" plan. "I'm more of a states' rights person," he said.

The plan being pushed by Democrats before his election wasn't good for his home state, Brown argued.

Massachusetts residents shouldn't "pay higher taxes and have half a trillion in [Medicare] cuts and basically be subsidizing places like Nebraska when we already have 98 percent of our people insured," he said. "We have a very good plan. It didn't make sense."

Massachusetts implemented its own health care reform bill in 2006.