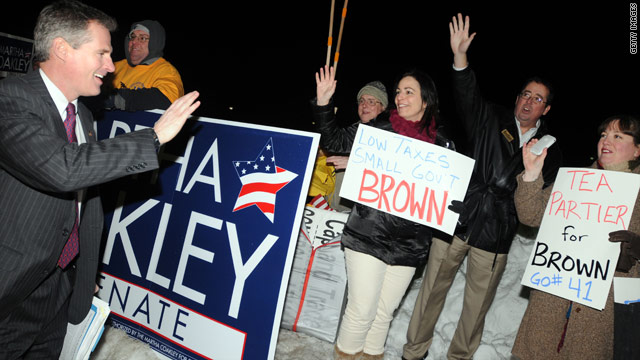 (CNN) -- A couple of weeks ago, President Obama appeared to be on the brink of achieving the Democratic dream of comprehensive health care reform.

Today that dream is at risk of being derailed in the most Democratic of states: Massachusetts.

Democrats are increasingly nervous over the once inconceivable prospect that they will lose Tuesday's special election to replace Sen. Ted Kennedy, who died last August. Losing the seat would strip Democrats of their 60-seat Senate majority and give Republicans enough votes to block the reform bill -- along with other key parts of the president's agenda.

Kennedy -- an advocate for health care reform throughout his career -- held his seat for more than 46 years.

No poll released in the past few days has shown Coakley ahead.

Brown's campaign, by most accounts, has seized the momentum in a race that until recently attracted little national attention.

Obama and former President Bill Clinton hit the campaign trail over the past three days in an attempt to save a Coakley candidacy often hampered by complacency and missteps.

Even diehard Democrats accuse Coakley, who once had a double-digit lead, of running a lackluster campaign.

"I wish she was more likable as a candidate. There are some things that are turning me off about her as a candidate," said Scott Olson, an undecided Democrat.

Heading into the race, few political analysts believed Brown had a serious shot at beating Coakley. Brown was underfunded and unknown statewide. No Republican has won a U.S. Senate race in Massachusetts since 1972. Democrats control the state's entire congressional delegation. They also hold the state's governorship, along with overwhelming majorities in the state legislature.

Brown, who has trumpeted his 30 years of service in the National Guard, hewed to traditional GOP themes at a rally on Sunday. He promised that, if elected, he would back tax cuts and be tougher on terrorists than Coakley.

Brown's surprising strength comes in part because some independents and conservatives who have supported Democrats in the past are having second thoughts.

Brown is "a hard worker who is not afraid to speak his mind," independent voter Bob Levine said. "It's also not a good to have a one-party state. It's way too one-sided now in Massachusetts, and that leads to corruption and favoritism."

Coakley "rested on her laurels and sat back for quite a period of time," she said. But now she's "gotten a kick in the rear end. The recent polls have been a real wake-up call."

John Avlon, author of "Independent Nation: How Centrists Can Change American Politics," said the outcome of the election will rest in the hands of the independent voters like the Levines. Although Democrats far outnumber Republicans in Massachusetts, there are more independents than Democrats and Republicans combined, he said in a commentary on CNN.com.

Several Democratic sources say multiple Obama advisers have told the party they believe Coakley is going to lose. The sources said they still hoped Obama's weekend visit to the state, coupled with a late push by party activists, could tip the balance in her favor, but Obama aides have grown increasingly pessimistic since Friday.

With the possibility of Coakley's defeat, Democrats are trying to figure out if they can pass health care reform without that crucial 60th Senate vote. Top White House aides publicly insist they are not engaging in any talk of contingency plans, because they believe Coakley will come out on top Tuesday.

The seat is currently held by former Kennedy aide and longtime friend Paul Kirk, who was appointed to the seat on an interim basis after the 77-year-old Kennedy died of brain cancer. Massachusetts Secretary of State Bill Galvin, a Democrat, said last week that certifying Tuesday's election results could take more than two weeks -- potentially enough time to allow congressional Democrats to pass a final health care bill before Brown is seated, if he should win.

But multiple Democratic sources say this is unlikely. Even if House and Senate Democrats could reach a deal to meld their bills and pass them in the next couple of weeks, there would be a huge outcry from not only Republicans, but also an increasingly distrustful public if they appeared to be rushing it through.

Two Democratic sources in close contact with the White House told CNN Monday they've urged the administration, in the event of a Brown victory, to push House Democrats to pass the Senate's health care bill as currently written. Doing so would prevent the plan from having to be taken up by the Senate again.

Those same sources say the White House agrees it would be "the simplest way to get from point A to point B."

Other Democratic sources, however, call this option extremely unlikely, because House Speaker Nancy Pelosi probably wouldn't have the votes to pass the Senate bill.