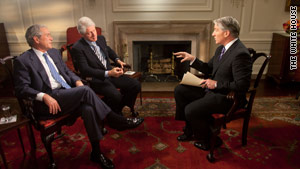 Washington (CNN) -- Former President Bill Clinton will travel to Haiti on Monday to meet with officials and deliver aid supplies to the quake-ravaged country, his foundation announced Sunday.

Clinton, the U.N. special envoy to Haiti, will meet with Haitian President Rene Preval and other members of the local government as well as aid workers, to discuss how to proceed with recovery operations.

In a pre-recorded interview broadcast Sunday on CNN's "State of the Union," Bush and Clinton said the first goal of the fund is to get aid to Haiti right away to save lives. It also seeks to ensure that money keeps coming in after public attention begins to wan in the weeks and months ahead.

"For me, success is helping save lives in the short term, and then we can worry about the long-term after the situation has been stabilized," Bush said.

Clinton, who also is the U.N. special envoy to Haiti, defined success as "setting up a network quickly to get the food, water, medicine, security and information people need."

The overall goal is to help Haiti resume "as quickly as possible" its efforts to build a "strong, modern society" after decades of political and social instability that made it the poorest nation in the Western Hemisphere before the earthquake, Clinton said.

Officials in Haiti fear more than 100,000 people killed in the disaster.

Video: Presidents team up for Haiti

Clinton noted that Haiti already was working to overcome its problems before the latest crisis.

"They have an economic plan," Clinton said. "We're going to have to amend it now, and substantially, to take account of the damage done."

Simply restoring Haiti to its impoverished state prior to the earthquake would amount to failure, Clinton said.

The two predecessors to Obama as U.S. leader also said the Clinton Bush Haiti Fund (http://www.clintonbushhaitifund.org/) was intended to provide people with a safe place to continue donating money to help the Caribbean country.

"Our job it to set up a fund to make sure the compassion is still existent once the crisis gets off TV and make sure the money is wisely spent," Bush said.

That means getting the donated money quickly to organizations with experience working in Haiti, including faith-based groups and international aid groups, Bush and Clinton said.

"During these crises, all kinds of fake charities spring up that take advantage of people's good will," Bush said. "We're safe haven. We will make sure the money is accounted for and there's transparency and properly spent."

Both Bush and Clinton noted politics should play no role in responding to the crisis, with Clinton saying: "I hope that it will humanize us all in every aspect of our lives."

However, Clinton couldn't resist a little politicking, praising the Obama administration's response so far and noting that the president had "extraordinary taste" in a secretary of state -- his wife, Hillary Clinton.

"You made this come alive to the American people," Clinton said. "You put us in the skin of the Haitian people, and I'm personally very grateful."

For Bush, his return to Washington is a welcome chance to aid a worthy cause, but nothing more.

"I frankly don't miss the limelight," Bush said. "I'm glad to help out."