50 states in 50 weeks shows state of the union 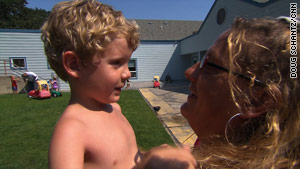 Julie Bonneau of Eugene, Oregon, said it's tough to get a job because there are so many applicants.

On CNN's "State of the Union," CNN host and chief national correspondent John King goes outside the Beltway to report on the issues affecting communities across the country. After visiting every state, King reflects on what he saw over the past year.

Washington (CNN) -- From beginning to end, they were accidental but inseparable partners: Hope and Anxiety.

The hope in President Obama and in the belief that things might change for the better.

"He is a model for every child," Edith Childs, a supporter who faced taunts as a child in the segregated South, told us as her friend Barack prepared to assume the presidency a year ago.

The anxiety caused by disappearing jobs, shuttered businesses and the gnawing fear that uplifting campaign promises would prove hard, if not impossible, to keep.

"Somehow, the little man has been falling through the cracks," Philadelphia, Pennsylvania, waitress Keitha Brandon told us a month into the Obama presidency. "Someone has got to save him."

To visit 50 states in 50 weeks was to meet the people behind the statistics and the polling data, and to watch up close as the nation's political mood and climate -- and the country's take on its president -- took several dramatic turns.

"I did not vote for him," Republican Harry Watkins told us in that same late February Philadelphia diner conversation. "But I see that he will compromise and put his hand out to the other party and will work together to get through this tough time."

By year's end, however, one thing the most liberal and most conservative Americans we met agreed on was the sense that President Obama had been unable to keep -- some argued, made little effort to keep -- that central campaign promise to fundamentally change Washington and conduct business in a new spirit of bipartisanship.

"I think the packaging was pretty glossy during the campaign," Charlie Groppetti said over dinner in Arkansas in November. "But we've had the package open for a while, and it's just the same stuff inside. ... It's the same old Washington."

There is no doubt that Obama enters his second year in office in a far more complicated and difficult political position than his first. His standing with the American people has declined significantly, and Republicans enter the midterm election year confident that November will bring significant gains.

The goal of our decision to visit all 50 states in the first year of "State of the Union" -- and the first year of the Obama presidency -- was to see how the big debates in Washington were perceived across America: from the economy and health care to Obama's pushes to bring troops home from Iraq but also to escalate the U.S. commitment in Afghanistan.

The economic anxiety was clear from beginning to end. Also clear was a steady shift in political economics, so as the first year dragged on, the argument that Obama had inherited a mess provided less and less insulation from the nation's sour economic mood.

In the earliest days of the administration, we saw the pain firsthand, visiting the Caterpillar factory in Peoria, Illinois, on the day the company laid off 2,000 people on top of a recently announced 20,000-person cutback in its global work force.

Those on the losing end included MariBeth and John Feagin. It was both jarring and inspiring to hear National Guard member and Iraq veteran John say that if neither he nor his wife could find work within a few months, "I would probably volunteer to go back overseas. And that's pretty bad to say." (John Feagin did, in fact, make a new commitment to the Army and is preparing to deploy overseas this month.)

At the time we met the Feagins in late January 2009, the national unemployment rate was 7.7 percent, and roughly six in 10 Americans approved of how the new president was dealing with the economy.

Six months later, when we met single mother Julie Bonneau in Eugene, Oregon, the unemployment rate had climbed to 9.4 percent, and the president's approval rating on the economy had declined a bit to about 50 percent. Her description of the search for work is one we heard time and time again in our cross-country travels.

"When you apply for a job now, you have 200 people standing in the same line," Bonneau told us. "It's really tough."

Particularly striking was the evolving mood among Obama supporters. Worries about the level of government spending came early in our travels, even among those who favored a big stimulus program but voiced worries that they saw no evidence that Obama and fellow Democrats we looking for cuts elsewhere in the federal budget.

Another constant was the perception the new administration was worried more about the needs of Wall Street than the little guy.

"In all fairness to President Obama, this didn't happen overnight," said Mike O'Rourke, a local president in Tennessee for the United Auto Workers union. "But I think it is real obvious we've got a double standard in this country."

Over breakfast in Las Vegas, Nevada, in April, Ronni Klein struck a populist tone that became more and more common as the year moved on: "I see them bailing out these big companies, but the everyday people are still losing their jobs, still losing their homes, and they don't have any money."

In Oregon in August, college student Matthew Jordan expressed a sentiment we were beginning to hear more and more about Obama.

"I've noticed lately a lot of people, well, a lot of things are, I don't know -- kind of getting to him," Jordan said. "He's slipping a little bit more. ... He kept so cool through the elections, and that's what people liked about him. And it's getting to him. I mean, it's the hardest job in the country, but we liked him because he kept his cool."

A few months later, at a November diner conversation in Fife, Washington, social worker Daniel D'Haem gave voice to liberal frustration that the year since the historic Obama victory had not brought about the legislative gains they had anticipated. Failure to pass a health care bill in the first year topped the list.

"I'd like to see the Democrats 'cowboy up,' " was D'Haem's appeal. "I think they have been incredibly risk-averse."

In our travels, we looked at several of the major issues up close. Failure to pass health care reform in Obama's first year is one source of Democratic frustration.

We met Carl and Elizabeth Walls in Clay County -- deep in West Virginia coal country -- two of the estimated 45 million Americans who lack health insurance. Carl was still recovering from a quadruple bypass and told us matter-of-factly: "If life and death depended on money, I'd just have to die."

"You'd be dead right now," Elizabeth chimed in as Carl recounted the emergency helicopter ride that saved his life but left him with thousands of dollars in unpaid medical bills.

In Arkansas, small business owner Stanley Walker told us that simple math was the reason he takes only half of his prescribed diabetes medication, so he spends about $220 a month instead of twice that.

"This is a situation where you actually take a gamble, but you can't afford not to," Walker told us.

He also told us something worth keeping an eye on as the election year unfolds: Walker said he would have a hard time supporting Democratic Sen. Blanche Lincoln for re-election if she did not support a public option as part of health care reform. "I'll be ashamed of them," he said.

Lincoln does not back a public option, and in a close race, the support of African-Americans like Walker could be critical.

We met Gregory Rose in Texas in July, and the uninsured 23-year-old, fresh out of college, walked us through his battle with leukemia.

His "Obama-Biden" 2008 campaign sign still hung in his apartment window as Rose suggested that politicians debating health care in Washington -- Democrats and Republicans -- should come spend some time in his shoes.

His advice? "Take the time and go by these hospitals, go by these health care clinics, and get an in-person view," Rose said. "Ask the questions. Ask the doctors. Ask the patients. ... If they would do that, I think they would have a better understanding and a better sense of the urgency."