Reid apologizes for racial remarks about Obama during campaign 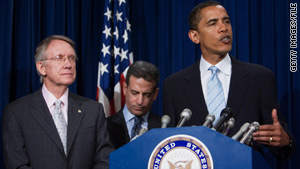 Sen. Harry Reid appeared in 2007 with President Obama, then an Illinois senator, for a press conference on ethics reform.
STORY HIGHLIGHTS

Journalists Mark Halperin and John Heilemann reported the remarks in their new book, "Game Change," which is scheduled to be in bookstores Tuesday.

The authors quote Reid as saying privately that Obama, as a black candidate, could be successful thanks, in part, to his "light-skinned" appearance and speaking patterns "with no Negro dialect, unless he wanted to have one."

"He [Reid] was wowed by Obama's oratorical gifts and believed that the country was ready to embrace a black presidential candidate, especially one such as Obama -- a 'light-skinned' African American 'with no Negro dialect, unless he wanted to have one,' " Halperin and Heilemann say.

"Reid was convinced, in fact, that Obama's race would help him more than hurt him in a bid for the Democratic nomination," they write.

In a statement to CNN, Reid said, "I deeply regret using such a poor choice of words."

"I sincerely apologize for offending any and all Americans, especially African Americans for my improper comments.

"I was a proud and enthusiastic supporter of Barack Obama during the campaign and have worked as hard as I can to advance President Obama's legislative agenda," the senator from Nevada said.

Reid pointed to his efforts to integrate the Las Vegas Strip and the gaming industry, among other legislation favored by African-American voters.

"I have worked hard to advance issues important to the African American community."

The senator called Obama Saturday afternoon to apologize for the racially insensitive remarks.

"Harry Reid called me today and apologized for an unfortunate comment reported today," Obama said in a statement.

"I accepted Harry's apology without question because I've known him for years, I've seen the passionate leadership he's shown on issues of social justice and I know what's in his heart. As far as I am concerned, the book is closed."

Reid, who waited to formally endorse Obama until after the tough presidential primary battle ended in 2008, is facing an uphill re-election fight this year in his home state.

Nevada's state Senate Majority Leader Steven Horsford, who is African-American, reaffirmed his support for Reid in a statement Saturday.

"While I am disappointed in Senator Reid's comment and choice of words, I accept his apology," said Horsford, a Democrat. "I have known Senator Reid for many years, and he has consistently been supportive of advancing the interests of the African-American community as he has for all Nevadans and all Americans."

CNN's Dana Bash and Rebecca Sinderbrand contributed to this report.