Gates to stay as defense chief at least another year 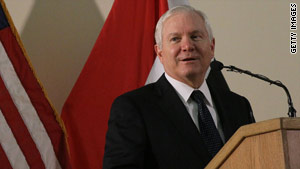 Secretary of Defense Robert Gates has told the president he'll stay on for at least one more year, the Pentagon says.
STORY HIGHLIGHTS
RELATED TOPICS

Washington (CNN) -- Secretary of Defense Robert Gates will continue in that position in the Obama administration for at least another year, a Pentagon spokesman said Thursday.

Geoff Morrell, deputy assistant secretary of defense and Pentagon press secretary, told CNN, "Secretary Gates met with the president just before Christmas and gave him a commitment to stay on the job for at least another year.

"They agreed to revisit this issue again later this year, but for all intents and purposes, their original agreement still stands: he (Gates) serves at the pleasure of the president indefinitely, and he is honored to do so, though he certainly looks forward to one day retiring to his family home in the Pacific Northwest."

Gates served as secretary of defense in the last two years of the Bush administration and stayed on in the post when Barack Obama took office.