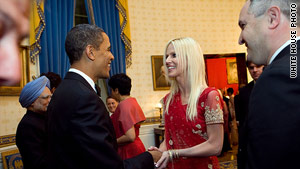 Tareq and Michaele Salahi attended a state dinner at the White House in November, despite not being invited.
STORY HIGHLIGHTS
RELATED TOPICS

Carlos Allen, the publisher and owner of Hush Magazine, has been questioned two or three times by the Secret Service, according to lawyer A. Scott Bolden, who told CNN on Tuesday that he had been hired by his client within the past 24 hours.

Tareq and Michaele Salahi made international headlines by crashing the same November 24 event that Allen attended and having their photo taken with President Obama, Vice President Joe Biden and other dignitaries.

The Secret Service announced Monday that a third person who wasn't on the official guest list had made it into the dinner by entering with the delegation of Indian Prime Minister Manmohan Singh.

A Secret Service statement said that a person traveled from an area hotel with the Indian delegation, which was under the responsibility of the State Department.

A senior State Department official said the man showed up at the hotel where the State Department was helping transport -- at the request of the Indian Embassy -- a group of Indian businessmen to the dinner.

The State Department official said it is unusual for the department to escort private foreign nationals around Washington, but said the embassy had made a special request because the group "was very important" to the Indian delegation.

"At present, there is nothing to indicate that this individual went through the receiving line or had contact with the president or first lady," the Secret Service statement continued.

The statement said the person's name had not been entered into the WAVES computer system for White House visitors, though the rest of the names in the Indian delegation were in the system.

Bolden said Tuesday evening that Allen has acknowledged being seated at the White House and staying for dinner. Bolden also said his client was an invited guest at the state dinner and said he had seen a copy of what appeared to be a White House invitation, though he acknowledged never having seen one before.

CNN's Elise Labott and Dave Alsup contributed to this report.