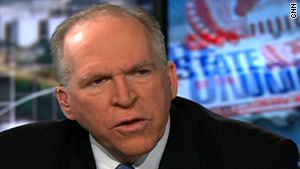 "There is no smoking gun piece of intelligence out there," John Brennan says Sunday of the failed Christmas bombing.
STORY HIGHLIGHTS

Washington (CNN) -- Human error and system lapses, rather than deliberate concealing of information, allowed a terror suspect with explosives to board a U.S.-bound airplane on Christmas Day, President Obama's terrorism czar said Sunday.

John Brennan, the assistant to the president for homeland security and counterterrorism, said on CNN's "State of the Union" that the security breakdown in the failed bombing of the Northwest Airlines flight was different from the September 11, 2001, terror attacks.

"There wasn't an effort to try to conceal information," he said, referring to the well-chronicled competition and turf wars among security agencies prior to the 2001 attacks, which was later blamed for the failure to prevent them.

"There is no smoking gun piece of intelligence out there," Brennan said of the failed Christmas bombing, allegedly planned by a Nigerian man who boarded the flight from Amsterdam, Netherlands, to Detroit, Michigan, with explosives in his underwear.

The suspect's father, a leading banker in Nigeria, warned U.S. authorities before the attack that his son might be involved with Islamic extremists.

Brennan said the father's information was part of "bits and pieces" of information that were never connected by intelligence officials to properly target the suspect.

"That was certainly an alert that came to our attention," Brennan said of the father's warnings. "He said, 'He's consorting with extremists in Yemen.'"

However, Brennan rejected another potential warning sign -- that the suspect purchased the airline ticket with cash in Ghana before traveling to Nigeria for the first leg of his journey.

"A lot of people buy their tickets in Africa with cash. That is the way, in fact, things are done, because there's so much fraud there. So that wasn't a necessary [warning] bell," Brennan said. "People in the Amsterdam airport didn't even know that he had bought the ticket for cash. He did bring on carry-on luggage. So there were a lot of things that were out there."

At the same time, Brennan conceded "there was information that was in the system that should have allowed us to stop it."

"A number of pieces were out there that weren't brought together," Brennan said.

On the same program, however, the Republican chairman of the 9/11 commission said Brennan was "wrong when he says this wasn't like 9/11."

Thomas Kean, a former governor of New Jersey, said both events occurred because the U.S. intelligence community failed to piece together various bits of information it already possessed in the weeks and months prior to the attacks.

If the information had been properly shared and analyzed, "then this guy would've never have gotten on a plane" on Christmas Day, Kean said.

In announcing the new security measures Sunday, the TSA stressed in a statement that "effective aviation security must begin beyond our borders."

As a result, any individual flying into the United States who is "traveling from or through nations that are state sponsors of terrorism or other countries of interest will be required to go through enhanced screening," the statement said. "The directive also increases the use of enhanced screening technologies and mandates threat-based and random screening for passengers on U.S. bound international flights."