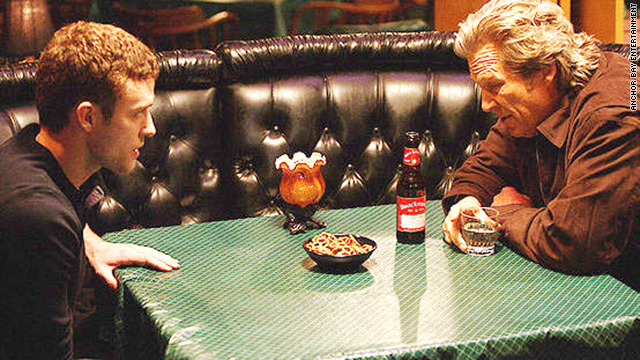 Jeff Bridges and Justin Timberlake play a father and his son in the 2009 film, "The Open Road."
STORY HIGHLIGHTS
RELATED TOPICS

Editor's note: CNN Contributor Bob Greene is a bestselling author whose books include "Late Edition: A Love Story" and "When We Get to Surf City: A Journey Through America in Pursuit of Rock and Roll, Friendship, and Dreams."

(CNN) -- Earlier this year I happened upon a movie I had heard nothing about.

Released in 2009, it did virtually no business at the box office: the Internet Movie Database, which keeps track of such things, says the film earned exactly $19,348. Which was a little surprising; the movie, called "The Open Road," featured a terrific cast -- Jeff Bridges, Justin Timberlake, Mary Steenburgen and Kate Mara, among others -- and I thought that, in its low-key way, it was wonderful.

It was about a Hall of Fame baseball player, now in retirement and picking up money on the autographs-for-pay circuit, and his complicated relationship with the grown son he seldom sees, a young man toiling with little success in the minor leagues. The baseball star had walked out on his wife and the son years before; now the ex-wife was facing a dangerous but necessary operation, and she told the son that she would not agree to go through with it unless he brought his father to see her in the hospital.

So the son, played by Timberlake, shows up unannounced at an Ohio autograph show to ask his dad, played by Bridges, to do this for the family. It's a road picture; everything that happens unfolds as they drive through the United States together, with the hospital as their destination.

What I liked best about the movie was the job that Bridges did playing Kyle "Lone Star" Garrett. Bridges had two films come out within a few months of each other at the end of 2009; "The Open Road" was released first, followed by "Crazy Heart," for which Bridges, playing a hard-living country singer, won his first Academy Award as best actor. Maybe a decision was made to put all of Bridges' promotional time into "Crazy Heart," which has earned more than $39 million. I enjoyed both movies, but I thought that Bridges was even better in "The Open Road."

Why am I telling you this now, all these months later?

In "The Open Road," Bridges' portrayal of the retired athlete reminded me of someone from the first moment he appeared on the screen. His offhanded looseness, his easy-beyond-easy charm, the Texas timbre in the tone of his voice, the effortless way he wore his celebrity like a faded pair of jeans he'd owned forever. . .Bridges' Lone Star Garrett was a man I sensed I'd seen somewhere in real life.

Before the movie was over, I realized who it was: Don Meredith, the former Dallas Cowboys quarterback who had become as famous as a man could be when he, Frank Gifford and Howard Cosell were the three stars of ABC's "Monday Night Football" in the broadcast's first years of immense popularity. I'd gotten to know and travel with Meredith a little bit during those years; in the film, Lone Star Garrett's conflicted attitude toward his enduring fame, the way he reflexively reacted to the strangers who were constantly approaching him and not knowing quite what to say to him ... even some of his lines were variations on lines that Meredith used over the years (Lone Star to a fan who wanted to know if it was really him: "Number 11 in your program, Number One in your heart").

I was touched by the message of the movie about the son trying to reconnect with the father who had always been so celebrated by the rest of the world, and I decided to find out, after I'd seen it, just who had been perceptive enough to come up with the story and get the details exactly right.

Which is when I learned that the writer and director of "The Open Road" was Michael Meredith: Don Meredith's son from an early marriage.

When Don Meredith's death at age 72 was reported last week, I thought about the movie again, and about how fathers and sons can struggle to communicate; about the nature of fame and its tricky lures, and about how we allow ourselves to regard far-off stars as something close to family.

Meredith was a considerably more interesting and multilayered man than the Dandy Don persona. I recall one evening in Cleveland Stadium before a Monday night game between the Browns and the Miami Dolphins. There was a party in a private club inside the stadium a few hours before kickoff; the owners and board members of both teams were there, as were around 100 other invited guests. It was the night that Spiro Agnew, Richard Nixon's vice president who resigned from office, gave his farewell address to the nation. There was a single television set in a corner of the room. With everyone else chattering about football and the game that would soon begin, two people sat on the floor next to the TV set, blocking out all the sports talk around them, listening intently on that historic night to every word the departing vice president of the United States said: Don Meredith and Frank Gifford.

In the movie, during those occasions on the trip when there are silences between the father and son, volumes are spoken. The father, it is clear, has been the recipient of gushing adulation from admirers from the time he was first able to pick up a baseball bat and glove. The son has long observed this, both close-up and from a distance; he can see, in people's eyes, what is about to happen once they cross a room and giddily initiate their moment with Lone Star. In the car, there are no fans, and no fame. Not a cheer can be heard, and that seems to be fine with both men.

I found some quotes that Michael Meredith gave to a writer at the time "The Open Road" was having its brief and neglected run in theaters. He said that, while the plot was fictional and thus not autobiographical, his family and friends had inspired the characters.

"It's fascinating to watch as [the father and son in the movie] express their feelings toward each other," Michael Meredith said, "because to some extent this is something I haven't been able to do in life. I think I'm educating myself as I go along.

"There's forgiveness, there's understanding, and there's the realization that none of us are perfect, and we're just going to have to accept our dads, our sons, our moms, our girlfriends and our boyfriends for who they are. These are old classical themes -- forgiveness and acceptance."

There aren't any eye-popping special effects in "The Open Road," no crowd-pleasing helicopter attacks or roaming bands of zombies. But if you were a fan of Don Meredith, and you should ever get the chance to see the father-son movie his son wrote and directed, I think you'll find it more than worth your time. There is a quiet sweetness to it, and by the last frame you are certain of one thing: the old athlete and his grown boy may find it hard to say out loud, but they're very proud of each other, and glad that they made the trip.