Star chef: Pay people what they're worth 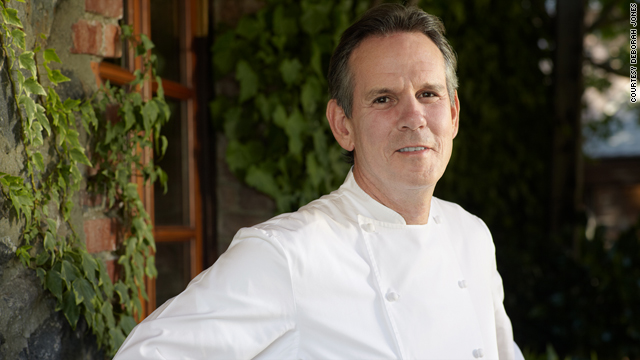 New York (CNN) -- When chef Thomas Keller heard about the quality of seafood from a supplier in Maine, he wrote to the company's owner.

"Would you sell me lobsters," Keller recalled asking.

The answer was no.

"She wasn't interested in selling me lobsters because she didn't know who I was and what my standards are."

It took Keller two years to get his first shipment of lobsters from Ingrid Bengis, a Fulbright scholar who has had a career as a writer in addition to running her company, Ingrid Bengis Seafood.

Keller, who spoke at the TEDx East conference in New York earlier this month, talked about the network of suppliers he uses for his now acclaimed restaurants, including The French Laundry in Napa Valley and Per Se in New York -- the wild mushroom forager, the dentists who run a fruit farm, the banker who decided to raise lambs.

In an interview with CNN, Keller made the case for going to extraordinary lengths to get the best ingredients, for paying suppliers more and for paying restaurant staff well. He took issue with what he described as the economy's relentless drive for producing and selling goods more cheaply.

The formula has paid off for Keller, whose two leading restaurants have been recognized with the top ranking of three stars in the Michelin Guide. Of course, the food does not come at a bargain price. A nine-course prix fixe dinner at the French Laundry goes for $250.

A generation and a half ago, Keller said, the Department of Labor classified chefs as domestic help. Today being a chef is a profession, and for some, a route to celebrity status. In the public's mind, chefs are virtually superheroes, as Keller noted: "We go to the market in the morning...we cook it all, we don't eat we don't sleep, we barely breathe, we do everything, but that's not the case."

In reality, he said in the interview, it takes hundreds of dedicated people at restaurants and suppliers for a chef to be a success. Here's an edited transcript:

CNN: What are the secrets to success in your business?

Thomas Keller: Well there aren't really any secrets. I think, No. 1, it's creating relationships. That's very important. If you have a relationship with somebody you understand who they are, what they do, what their goals are. It's working together in a collaborative effort to elevate everybody.

No. 2, it's really about money, paying somebody what they're worth. We have a society today, especially in this country, which really kind of confuses me. -- when we want to have the very best and pay them the very least for it. Didn't your mother ever tell you -- you get what you pay for?

It is not my job to negotiate on price. It's my job to demand a high level of quality, and you have to work with somebody to raise that level of quality continuously. So we can have a better product and at the end of the day, pay them what it's worth. They need to be supported in so many ways, whether it's our fishermen or our farmers, our gardeners or our foragers.

CNN: Does it concern you that if you pay everybody what they're worth, your price hits the stratosphere?

Keller: In and of itself, yeah, does it concern me? It does and it doesn't. In one way we are supporting an amazing group of individuals who are working hard on changing the way things are done. Our lamber [Keith Martin] in Pennsylvania, for example, has established a protocol for the way his lambs are raised and fed. He has eight other farmers in western Pennsylvania and eastern Ohio who adopted his protocols.

He looks at the way he raises lambs in a holistic way. It is about the life of the animal, not the commodity it becomes after it's slaughtered. And typically the livestock industry looks at everything they do as a commodity, not an animal. So, we lose that connection with how to raise it.

I don't know how much Keith's lambs cost, I don't really get into that. I don't want to know. I just want to be able to support him and his quest to continue to really voice his concern and his vision about how to raise them, and hopefully that will change everybody. It has changed nine farmers so far, himself and eight of his co-workers, so it's great.

CNN: Does it concern you that you are dealing with the high-end, but maybe not having an impact on the mass market?

Keller: Yes and no. One way that we are able to accomplish dealing with more, I don't want to say masses, but certainly more people is that we were able to buy the entire lamb. And we'll use the luxury cuts, the rack and the saddle, at the French Laundry. But we'll use the legs at Bouchon and the shoulders at Ad Hoc.

CNN: In the world of food, are you encouraged by the trends that you see developing, the movement for more local foods?

Keller: Well, it's interesting because the generation before us, our parents and our grandparents, it was always local foods, right? I mean, it wasn't until really the refrigeration of boxed cars and the mobility to ship food around the country that changed the way we eat, changed what's available to us. My grandparents -- they all had a garden, they had fruit trees, they had most of the products around them.

The movement toward urban cultures and societies today has resulted in diminishing impact from local producers. You have to redefine local. To me, 15-20 years when I started thinking about local, local wasn't about geographical proximity. Local was about the quality of the product. My lobsters come from Maine, extraordinary lobsters; I get them every day in the restaurant.

Today, of course, you start to rethink what local means. This whole locavore movement, sustainability and all these different things, and we start to say, "OK, we are averse to using products that are being shipped across the country."

It's part of the [carbon] footprint, but I think about it in a different way because there has to be a balancing act. Someone like Keith Martin who I think is an extraordinarily important person, somebody who has a potential to have an impact on this industry, would be out of business if he had to survive on a local community of buyers. He wouldn't have been able to impact other farmers around him to embrace his protocol because they would have no market for their lamb.

Somebody like Ingrid Bengis in Maine who supplies us our lobsters works with the fishermen there. In Maine, they thrive because they are fishermen and they sell their wonderful fish around the country. I can name hundreds of people who really rely on not only local opportunities to sell their supplies but far-reaching ones, as well.

CNN: How do you combine that with a concern about sustainability?

Keller: Sustainability to me results in an industry that is able to re-establish itself over and over again without depleting from the earth, the air, things like that. I think the only problem with working with people like Ingrid or Keith is that carbon footprint that we've talked about. But I'm fine with knowing that I'm supporting somebody who is giving their community an extraordinary opportunity.

Sustainability is something we are always working toward. It's a really fine line because it is something that chefs really never thought about before. I mean our primary job is to get the best products we possibly could and serve them to you. Today there are so many people in the world that are vying for those ingredients, and there's only a certain amount of it.

So, we've depleted the world of good food. It's not because people don't recognize sustainability; people were hungry for bluefin tuna. There were so many of them that we just ate it all up. So really the answer is what? Fewer people. That's what I believe. How do you sustain a wild fish? Well, you have to stop fishing; you have to watch what you are taking out. How do you feed the demand for that fish? You don't.

CNN: If you could change American attitudes toward food in any way, how would you do it?

Keller: I think what I said earlier about them being willing to pay for products. To really support the farmers and fisherman. That's the one thing that I would really want them to do. It's a difficult thing to say because, especially in this time or any time, there are people out of work, people have budgets. It's a very difficult thing to say to somebody, "Go to the market and really speak with your pocketbook and demand better products and higher quality," so that's the only way we are going to get it.

What's happening in our marketplace today at a retail level is a direct result of chefs. Everything that you see in your grocery store today, in terms of the higher quality and more variety and more seasonality, is a result of what chefs have done in their restaurants.

Chefs have set the example that consumers follow. So I want arugula now, or I want to to see a short rib or whatever it is. It's being written about. What's being produced in restaurants, people see it and say I want to get them.

When I was a kid, how many varieties of lettuce did you see in the store? Iceberg lettuce! Now you have 12 different lettuces to choose from anywhere -- from arugula to endive to whatever. And it's because chefs have demanded those products in their restaurants.

CNN: You've been one of the pioneers in the inventive uses of vegetables.

Keller: You know vegetables are the one thing that elevates anything on the plate and are in and of themselves center-of-the-plate opportunities. When you talk about that center-of-the-plate product you used to think about it as proteins, but now it's vegetables, too. Our garden affords us the ability to really produce a large variety of vegetables and very seasonal.

CNN: And vegetables may be more sustainable ultimately than seafood or some of the other offerings?

Keller: It's about how they're farmed. I mean there are parts of California, our wonderful valley there that produces a lot of vegetables from probably some of the most toxic land in the world. You know, it just depends on how they are farmed. Are they sustainable? Certainly it's sustainable, it's sustainable in organic ways. But again, it's going to cost more money.