Murkowski victory a stinging rebuke to Palin and extreme partisans 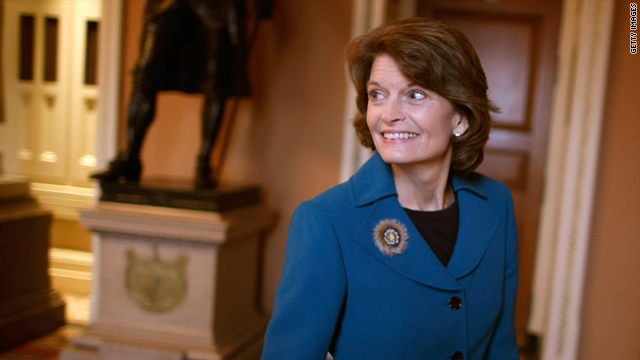 Sen. Lisa Murkowski, R-Alaska, walks through the halls of the U.S. Capitol on November 15.
STORY HIGHLIGHTS

New York (CNN) -- Sen. Lisa Murkowski's win should be a wake-up call for the Republican Party.

The Alaska senator's courageous decision to fight on after losing a closed partisan primary was rewarded with the first write-in Senate victory in a half-century. It is a stinging rebuke to Sarah Palin by her fellow Alaskans.

It also represents a centrist reality check to the right-wing conservative populism which has dominated headlines over the past year. Now Murkowski will re-enter the Senate as a political force in her own right, liberated by this trial-by-fire election.

Here are three lessons her victory should teach the GOP and Americans as a whole:

Closed partisan primaries are a problem

Murkowski's win is the latest evidence that closed partisan primaries are distorting our democracy -- and creating a particular problem for the Republican Party. Primary elections in which only those enrolled in a party can vote, empower candidates who appeal to hardcore party activists and ideologues, but not the electorate at large.

Only 18 percent of the total Alaskan electorate voted in the primary, which Murkowski lost by less than 2,000 votes. She -- and any other candidate -- deserved to have a chance to present her case to all the voters, especially in a state like Alaska, where independents outnumber Democrats or Republicans.

Closed primaries are one of the forces that pull the parties to the extremes, increasing their polarization and their disconnect with voters in the center. Closed primaries gave the GOP losing candidates like Christine O'Donnell, Sharron Angle and Carl Paladino, folks who appeal to the intense fringe but alienate the moderate majority of voters.

Sarah Palin is not that powerful -- even in her backyard

The Palins are media celebrities at this point, but their political power is overstated outside her passionate conservative populist base. The reality is that Palin is deeply polarizing in the Republican Party and even in her home state.

Murkowski: 'We made history'
Closed primaries are one of the forces that pull the parties to the extremes.
--John P. Avlon
RELATED TOPICS

Murkowski's win was a direct repudiation of Palin's chosen nominee, Joe Miller. And while the Murkowski and Palin families have a political rivalry that resembles the Hatfields and the McCoys, it's still significant that the newly elected Murkowski is speaking out against a possible Palin 2012 run in terms you rarely hear in Washington.

"She would not be my choice," she told CBS News. "I just do not think she has those leadership qualities, that intellectual curiosity that allows for building good and great policies. You know, she was my governor for two years, about two years there, and I don't think that she enjoyed governing. I don't think she liked to get down into the policy."

That's a kind of brutal honesty that hasn't been directed at Palin from within the GOP to date.

The GOP needs its centrists

Murkowski was attacked as representing the "center-right" by Sarah Palin in the primary, and even called an "out of touch liberal" -- from the far-right's perspective, anyone who doesn't agree with them 100 percent of the time on social and fiscal issues is often dismissed as a liberal.

Murkowski now stands as one of the leaders of Republican centrists in the Senate alongside Massachusetts' Scott Brown, Illinois' Mark Kirk and Maine's Olympia Snowe and Susan Collins. It is a distinguished but dwindling tradition, but Murkowski's win is a reminder that it is important to the GOP's long-term success. And for those who foresee nothing but gridlock from the closely-divided Senate, these GOP centrists, working together with Democratic centrist senators, could hold the balance of power and allow bipartisan legislation to move forward.

Not incidentally, all these GOP centrists are pro-choice (and most are more fiscally conservative than the bring-home-the-bacon Murkowski). In contrast, it's worth considering that of the five statewide candidates the Republican Party put forward who opposed abortion even in the cases of rape and incest, four went down to defeat in an otherwise overwhelmingly Republican year: Joe Miller, Nevada's Sharron Angle, Colorado's Ken Buck, and New York's Carl Paladino. The bottom line is that the GOP needs both wings to fly in the future, not just the right wing.

Lisa Murkowski has every right to be, not only gratified, but liberated by her historic win. She refused to put the party's primary process before the people of Alaska. She was unceremoniously stripped of her committee chairmanships when she decided to carry on her campaign, but now comes to Washington with her reputation enhanced. Murkowski is not and was never the "out of touch liberal" that Palin described. She fought against the conservative populist tide in an unrepresentative closed primary and was rewarded by a historic endorsement by the people of Alaska as a result.

It should be a wake-up call to Washington and a reminder to the Republican Party that it is ultimately accountable to a group far broader than just its activist class.