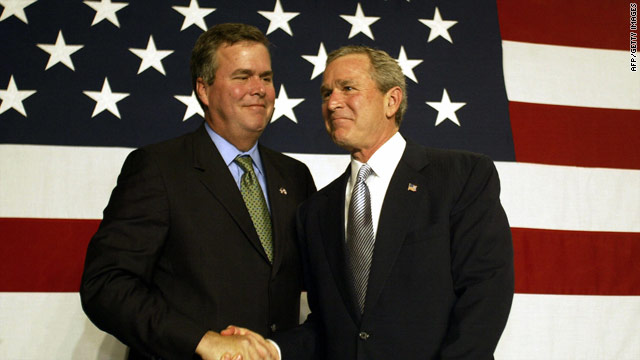 George W. Bush shakes hands with his brother Jeb during a fund-raising event in Florida, in January 2004.
STORY HIGHLIGHTS

Editor's note: Ruben Navarrette Jr. is a nationally syndicated columnist, an NPR commentator and a regular contributor to CNN.com.

San Diego, California (CNN) -- Americans are horribly divided over the legacy of our 43rd president: George W. Bush. These factions locked horns when Bush was in office, and they're at it again this month now that Bush has released "Decision Points," a memoir of his personal and political life.

Supporters see a good man, a compassionate conservative and a natural-born leader who said what he meant and meant what he said and shepherded the country through some of its most difficult moments after the attacks of September 11, 2001, and who didn't dodge tough issues to be popular.

Detractors see a dishonest politician who never had the smarts for the job, and thus surrendered control over the presidency to a Svengali-like cast of characters who ran the country and the economy into the ground while the president spent his days mountain biking and turning in early.

As with most things, the truth is probably somewhere in-between. One thing is certain: After nearly two years of watching President Obama try to navigate the most important job in the world like a boat without a rudder and, in the process, watching him disappoint, anger and frustrate even loyal supporters, George W. Bush never looked so good.

In fact, some folks in the GOP are so convinced that there is a Bush renaissance in the offing that they're hoping to turn that wave into another White House victory for the Bush family.

That's right. If the era of Bush fatigue is really over, then here comes baby brother. Jeb Bush, the popular former two-term governor of Florida, is being mentioned as a viable Republican candidate for the presidency in 2012, although he has denied having an interest in running.

(Both Bush brothers will be guests on a special edition of State of the Union with Candy Crowley, Sunday at 8 and 11 p.m. ET.)

While Jeb has his share of detractors, he also seems to have the same knack for bringing people together that his big brother had for driving them apart. And, with the Tea Party ready to go to war with the GOP establishment in the political equivalent of a cage match for control of the Republican Party, that skill set could come in handy.

Jeb...seems to have the same knack for bringing people together that his big brother had for driving them apart.
--Ruben Navarrette Jr.
RELATED TOPICS

Another thing that Republicans need right now is someone who can help them make peace with Hispanics. The nation's largest minority, and one of the fastest growing segments of the electorate, has declared a war of its own: against Republicans who treat them like piñatas with racism and scare tactics to rustle up voters from white people.

In states like California, Arizona, Nevada and Texas, that translated into solid Latino turnout for Democrats. But it was a different story in two other states; Sen.-elect Marco Rubio got 55 percent of the Latino vote in Florida, and Gov.-elect Susana Martinez got an impressive 38 percent of the Latino vote in New Mexico. But in both those cases, Rubio and Martinez took positions on the volatile immigration issue that were somewhat nuanced, and resisted the kind of racially charged rhetoric that other Republicans find so irresistible.

The lesson: Hispanics are fair-minded folks who won't issue a blanket indictment against every Republican on the ballot, but they will hold accountable those who cross the line in words or deeds.

That's good news for Jeb Bush, a fluent Spanish speaker who is married to a Latina and who, in his 1998 election and 2002 re-election as Florida governor, got as much as 60 percent of the Hispanic vote -- an even better showing than his brother registered with Hispanic voters in Texas.

George W. Bush has said he doesn't think his brother will run for president in 2012, and he might be right. But that could change, and W is right to say he hopes it does. After all, with Latinos on their way to becoming 20 percent of the U.S. population, one of W's most significant political legacies is that he showed that Republicans could get a fair hearing from Latinos -- if they gave those voters the respect denied them by Democrats who take their support for granted.

In some parts of the country, as tempers flare over the immigration issue, that legacy is now being threatened. George W. Bush built all these bridges to the Latino community, and they're being blown up one by one by idiotic and shortsighted opportunists in his own party who aren't thinking long-term.

Someone needs to get in there and repair the breach. Someone needs to convince Hispanics that Republicans aren't their enemies and point out that Democrats haven't always been very good friends. Paging baby brother.