Olbermann and the dangers of partisan media 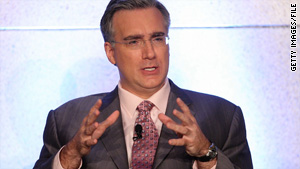 (CNN) -- Keith Olbermann's suspension for making political contributions to three Democratic candidates is just the latest example of the problems that come with the rise of partisan media.

In the fallout, other MSNBC personalities were also found to have given to Democratic candidates, while Media Matters uncovered the fact that more than 30 Fox News hosts and contributors had donated to conservative candidates.

Whole news networks are being transformed into little more than on-air advocates for political parties. The idea of objectivity is now increasingly dismissed as a myth rather than honored as an ideal toward which the news industry should strive.

Americans are self-segregating themselves into separate political realities -- responding to the proliferation of information by consuming news that confirms their political prejudices. Loyal viewers see opinion-anchors like Olbermann or Glenn Beck as the only "truth-tellers" in town, while dismissing the rest of the media as cowardly or biased. We are devolving back to the era when newspapers were owned and operated by political parties.

The result: Partisan warfare is on the rise, and trust in media is on the decline. The Pew Research Center for the People & the Press has documented the trend and concluded that "virtually every news organization or program has seen its credibility marks decline" over the past decade.

Even C-Span, which offers unedited coverage of public events without commentary, has experienced a steep -- and absurd -- decline in believability. In this hyperpartisan environment, people literally don't trust what they see with their own eyes. Polarizing for profit might be good for ratings in the short run, but its bad for the country.

Olbermann's on-air protégé Rachael Maddow described the difference between MSNBC and Fox as this: "They run as a political operation, we are not." She added, "The point has been made and Keith should be back hosting 'Countdown'" -- less than 24 hours after his suspension.

It's natural for Maddow to defend Olbermann -- they are close colleagues, talented broadcasters cut from the same ideological cloth. What was more surprising was the number of conservative commentators who rushed to Olbermann's defense. They embrace the idea of hyperpartisanship in all things news and opinion.

Fox News -- which rarely loses an opportunity to attack the left -- gave comparatively little coverage to Olbermann's suspension. Here's the reason for their reaction: Conservative media warriors welcome outright liberal advocates, because they justify the right's own ideological approach.

Olbermann symbolizes a fight for public opinion that the right believes it can win. After all, at any given time roughly 50 percent more Americans self-identify as conservative rather than liberal. A 2009 Pew poll found that 15 percent of Americans call themselves conservative Republicans while just 11 percent describe themselves as liberal Democrats.

If right-wingers give Americans false choices between the two, they know they can win. But this approach ignores the plurality of Americans who are in the center -- and the fact that independent voters are the largest and fastest growing segment of the electorate. That is a huge unmet market looking for a strong advocate.

In the current hyperpartisan media environment, it's easy to forget that it hasn't always been this way. Broadcast icon Edward R. Murrow was not a registered Democrat or Republican -- he was an independent. Before courageously taking on Sen. Joe McCarthy, he was considered an anti-communist, supporting, for example, the execution of the Rosenbergs as spies for the Soviet Union. He wouldn't have dreamed of giving donations to political candidates.

Murrow's colleague Charles Collingwood said, "His politics were based on old-fashioned notions of morality and honor, not ideology." If this sounds simply old-fashioned, it should not. This idea is at the enduring heart of both good government and good journalism.

Sen. Patrick Daniel Moynihan famously said, "Everyone is entitled to their own opinion, but not their own facts." But the current polarized political environment results in Americans engaging in civic debates armed with only their own exaggerated partisan "facts" -- for example, the latest overheated myth that President Obama's trip to India was going to cost $200 million a day and be accompanied by 34 warships -- and cynicism becomes justified with the knowledge that news anchors are shilling for political parties. This is ultimately dangerous for a democracy.

The current spin cycle might be hitting such a sickening extent that there is a demand for something different -- that's the impulse that I believe was behind the success of Jon Stewart's Rally for Sanity last weekend. After all, 44 percent of Americans born after 1977 identify themselves as independent, according to the Pew Center. The American people want something more than the predictable parroting of partisan talking points.

Independent on-air journalists don't have to be without opinion to be nonpartisan -- they just have to be honest brokers, punching left and right as their conscience and common sense dictates. We need to play offense from the center and create a strong alternative.

The ideal of independence is being degraded by the proliferation of partisan media. The fact that undisclosed donations by opinion anchors like Olbermann are being defended is evidence of how far off course we've gotten. The lines between political and media figures are blurring; we are getting used to journalists functioning as party apologists while elected officials sound increasingly like radio talk show hosts.

But the search for the truth doesn't conform to a partisan prism. Reasserting reasonable standards of independence can help restore trust in the news media and help stop the political Balkanization of the United States.