The recession was made in China 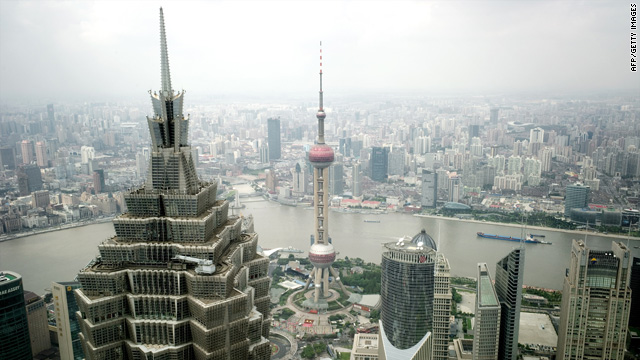 A view of Shanghai's financial district. China is booming at the expense of the U.S., David Frum says.
STORY HIGHLIGHTS

Editor's note: David Frum writes a weekly column for CNN.com. A special assistant for President George W. Bush from 2001-02, Frum is the author of six books, including "Comeback: Conservatism That Can Win Again," and the editor of FrumForum.

Washington (CNN) -- The Financial Times reported Sunday that "global economic co-operation is in disarray and further battles in the currency war look likely after the weekend's meetings of finance ministers and central bankers end with no resolution."

The rancorous meeting took place here in Washington, in the sleek headquarters of the International Monetary Fund. The ministers and bankers had gathered to settle a big dispute over interest rates and currency between the United States and China.

China thinks U.S. interest rates are too low, and the U.S. dollar too cheap. America argues the contrary: It is China's currency that is out of line.

Many influential Americans share the Chinese point of view: Thomas Hoenig, head of the Kansas City Federal Reserve, has strongly argued for higher U.S. rates to prevent future inflation. The Hoenig view is endorsed by prominent financial commentators, such as CNBC's Larry Kudlow and the editorial page of The Wall Street Journal.

We all can see the responsibility of Wall Street and the U.S. mortgage market for today's global recession. Yet behind both is a more fundamental cause: China's financial rise. As much as the products in the aisles at Wal-Mart, this recession was made in China.

China earns its living by selling to the United States. In recent years, it has sold more and more: China's exports doubled in the 1990s. In the 2000s, they doubled -- twice. And of course far and away the biggest market for Chinese goods was the United States.

Economists would expect that China's huge trade surpluses with the U.S. must sooner or later cancel themselves out. It's basic supply and demand.

1) China sells us more than it buys.

7) Therefore the trade surplus ends. It's all beautifully self-regulating.

The trouble with the theory is that in China's case, step 3) does not happen.

You got a fabulous deal on your mortgage because China's workers were prevented from spending the money they had earned.

This process accelerated through the 2000s, but it went into hyperdrive in 2005, when China's trade surplus abruptly spiked. Bigger surplus, more dollars, more lending. 2005 was the year the subprime mortgage boom began.

China's lending spree translated into an American debt binge. The debt of the U.S. nongovernmental sector surged after 2005 to levels last seen in -- uh oh -- 1929. And from the top of the roller coaster, it's a long, scary ride back to Earth.

The U.S. Federal Reserve has tried to cushion the pain of the Great Recession by cutting interest rates to zero. But those low interest rates have done an interesting thing: They have turned the tables on the Chinese.

Zero interest rates in the U.S. are pushing down the value of the U.S. dollar against every world currency. A dollar bought about 110 yen in the summer of 2008. A dollar now buys 83 yen.

The Chinese government has fiercely resisted a corresponding decline in Chinese currency. But that resistance has nasty internal effects for China.

As America prints more and more money to prevent deflation, China must (if it wants to sustain the dollar-renminbi parity) print equal money -- risking inflation. The excess cash that once triggered a housing bubble in the U.S. is now sloshing back into China, creating an even more horrifying housing bubble in China's big cities. China has been placed back where we were in 2005.

One would be to accept the need to stop Chinese inflation and allow its currency to rise -- accepting reduced exports and employment in China.

The other? Continue manipulating the currency to sustain Chinese exports and employment -- and accept accelerating inflation and probably an ultimate crash.

If China's finance ministers and bankers are yelling at Americans at the IMF, it is not because Americans are wastrels and spendthrifts. It is because China wants us to subject the American population to more economic pain to redress a problem the Chinese themselves have created for the world and for us.

Nuts to that. Let 'em howl.

[An earlier version of this column had an incorrect exchange rate for the Euro. Thanks to the commenters for pointing that out.]