We ignore rise in drug abuse among kids 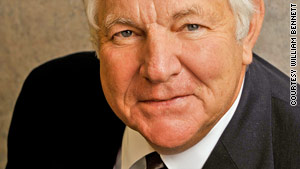 Editor's note: William J. Bennett is the former director of National Drug Control Policy, or drug czar, under George H. W. Bush, and a CNN contributor. Alexandra Datig is an anti-drug activist and the founder of nipitinthebud2010.org. Seth Leibsohn is a fellow at the Claremont Institute.

(CNN) -- Last week, the government released its National Survey on Drug Use and Health. It didn't make much of a news splash, but it should have -- and in years past, it would have.

When a serious war is taking place, officials throughout the administration hold press conferences and issue statements while print and televised media across the country report on it. Almost none of this happened, although the reasons for talking and reporting are greater than they have been in a very long time.

Read the full National Survey on Drug Use and Health

Then there's the death toll. Nearly 40,000 Americans are killed each year by drug overdoses -- not drug-related car accidents, not drug-related gang violence or homicide; those are an entirely different and eye-popping set of numbers. By overdose alone, we lose the equivalent of more than one 9/11 a month and almost eight times as many Americans as have been killed in Iraq and Afghanistan since 2001 (deaths the national media reports on weekly, if not daily).

Who, outside those that toil in the fields of addiction and recovery, knows these numbers? And how many people caught this in another recent report: Almost 30 percent of public school students ages 12-17 attend schools that are both "gang and drug-infected." This accounts for almost 6 million children attending schools where drugs and violence dominate their campuses. Places of learning, places once known as safe.

Keeping drugs from children should be our main focus and concern. As Joseph Califano, the founder of the Center on Addiction and Substance Abuse, points out, a child who gets to age 21 without using illegal drugs "is virtually certain never to do so." But fewer and fewer children are getting the message they need about the dangers and toxicity of illegal drugs, both from our national leaders and our culture. The message the dominant culture in America does send on drug use and abuse is the wrong one.

President Obama may be struggling to find an issue on which leaders from both sides of the aisle can come together. We suggest the growing drug abuse epidemic as ideal. But our president, a man popular with the youth of America, a man children look up to and listen to, has been silent on the issue, the very one with which he could make a dramatic difference in the lives of young people.

As for the popular culture, the message has been even more damaging. Where once television shows actively promoted the dangers of drug use, several of our more popular shows, from "Weeds" to "Entourage" to "Mad Men," make drug use a laugh line.

Back when our country was making a serious assault on drug abuse, a show like "Weeds" would never be aired. Today it is promoted in full page ads in our nation's most popular magazines. This, for a comedy about the life and times of a marijuana-growing and -dealing family. As the head of the network that produces and airs "Weeds" put it, "Our ratings were va-va-va-voom! Who said hedonism is passé?" This, for a show where one is lured to root for a family responsible for the death of a DEA agent, children dropping out of school, gang violence and rape.

In the meantime, the state of California has certified a proposition for November's ballot that would legalize the individual possession of dozens of joints of marijuana, even as more and more studies come out revealing the connection between marijuana use, psychosis and psychotic symptoms, among other ill-health effects; even as a recent Rand Corp. study found that such a legalization scheme in California could increase use by as much as 50 to 100 percent. Just what California needs. The most recent polling shows this proposition has an even chance of passing.

With all this, it should be no real surprise the drug numbers are on the increase. Our national leaders are silent, our culture makes laugh lines of drug use and serious numbers of serious people are advocating further legalization.

Legalization, however, is a siren song that truly will shipwreck more of our youth. Even with marijuana as prevalent and accessible as it is to young people, there is a reason the numbers for alcohol and tobacco use are higher than illicit drug abuse. When one talks to children, they give the answer: It is found in the word "illegal." Legalization removes stigma, is the handmaiden of availability and, as Joe Califano has pointed out, "availability is the mother of use."

Once upon a time, our national and popular cultural leaders took a strong stand against drug use, and a unified, concerted message was disseminated to help reduce drug use in America. It worked. In the late 1980s and early 1990s, use was reduced by more than 50 percent. But it took effort from our political leaders, our cultural leaders, television, movies and schools -- everyone got involved to help create a "sobriety chic" where drug use was not glamorized, and the media gave intense coverage to the devastation wrought by drugs.

That is exactly what is needed again, and now. We know how to do this. There is a rare group of actors and entertainers who have been lucky, fortunate, rare enough to overcome their addictions. Society has cheered for them and repaid them for their recovery at the box office. We should find a way for them to convey to the public their cautionary stories as to what it was like thinking they were going to die, or waking up in a cold jail cell, about their ruined relationships and the time they wish they had back.

At the same time, let's start a national campaign with those who have not had drugs ruin their lives. Let them be the new national role models for young people. We should see public service announcements and ads from the likes of Beyonce, Reese Witherspoon, Jennifer Lopez, Taylor Swift, Tim McGraw, the Jonas Brothers; from the likes of the Williams Sisters and the Manning brothers; from Jimmy Johnson and Danika Patrick.

This issue needs such a campaign. In drug recovery circles, there is a popular saying: If you do the same thing over and over again, you will get the same result. This message has a very helpful converse however, if we repeat the strategies we used that worked once before, i.e., in the late 1980s and early 1990s, we can also get the same result.

This is our plea to the country's national and cultural leaders: Address it, talk to our youth about it, make a campaign of it and, as for Hollywood and the rest of California: Stop with the drug use and legalization "chic." Such a national campaign worked before, it can work again.

The opinions in this commentary are solely those of the authors.