Why foreign aid is important for Africa

By Charles Abugre, Special to CNN 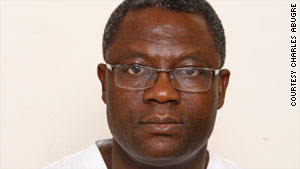 Editor's note: Charles Abugre is regional director of the UN Millennium Campaign, which is campaigning to end poverty by 2015. Based in Nairobi, he writes for CNN as part of Africa 50, a special coverage looking at 17 African nations marking 50 years of independence this year. He argues that foreign aid is important for Africa's development and can be made more effective.


Nairobi, Kenya (CNN) -- The idea that those who have should share with those who don't is inherent in most societies -- insects, animals and humans alike.

Sharing is essential to maintain and protect the collective, and empathy is an essential value of what it is to be human. It is inhuman to watch another dying of hunger and not share when you have more than enough to eat.

International aid is the instrument by which this very human practice occurs in modern times across borders, and should ordinarily not be controversial. But it is -- very much so.

Food aid is the root of the international aid system, although it represents only a small proportion of total aid (three to five percent). Thanks to international emergency response, famines and other natural and human-made disasters no longer kill in the numbers they used to prior to the 1980s.

But the biggest area of contestation is so-called development aid. This was made popular by the U.S. support to war-torn Europe and later institutionalized in the post-war international political and economic institutions and applied to countries emerging from colonial occupation.

There are two justifications for so-called development aid: humanitarian and economic.

Aid can save lives and ameliorate suffering, not just in the short term but in the long term.
--Charles Abugre

The humanitarian justification is strongly tied to addressing the moral indignation associated with poverty in a world of immense capabilities and astounding wealth.

Aid can save lives and ameliorate suffering, not just in the short term but in the long term. There is truth in this.

Debilitating diseases such as smallpox, tuberculosis, river blindness or leprosy have been controlled thanks to targeted development aid efforts.

Millions of children in Africa are alive thanks to the control of measles and other vaccinations. Hundreds of thousands more lives have been saved thanks to international cooperation to fight HIV/AIDS and malaria.

There is much greater agreement that targeted aid seems to work better: de-worming, dietary supplements, malaria nets, vaccines, cash transfers to the poor, education subsidies, the use of condoms, urban and rural water provisioning -- these seem to achieve their objectives.

But the scale of success and sustainability of even this type of aid is contested: there are stories of graft, of dumping of products, and intellectual property and rules that constrain disease-ravaged countries from producing drugs and nutrient supplements for themselves.

Also, without transformed and productive economies to supply the revenues for governments to pay for these, and the incomes (derived from decent employment) for people to purchase services, even targeted aid can create micro-level dependencies.

Without aid, many countries cannot develop the capacities to produce the goods and services they can trade in the international market.
--Charles Abugre
RELATED TOPICS

The dimension of aid that is most contested is that associated with economic development.

There is evidence that aid has successfully supported economic development, including countries successfully emerging from aid dependency.

Important examples are Indonesia, Korea and Thailand between the 1960s and late 80s. In the 1980s, the proportion of the Indonesian government expenditure financed by aid exceeded 70 percent, reaching 81 percent in 1988 and declining steeply afterwards.

Aid made up between 25 and 75 percent of government budgets of the heavily government-controlled Korean economy in the late 60s and 70s. Malaysia was not dissimilar.

However, long-term aid dependency was avoided by a deliberate policy of expanding domestic resource mobilization and attracting foreign investment.

Although the Rwandan budget is financed by aid to the tune of 50 percent, the economy has doubled in size over a decade and is fast diversifying.

Similarly, whilst the share of aid in Ethiopia's budget is high, the per-capita aid receipt is well below the sub-Saharan African average, but the economic growth is one of the fastest in the world.

In all cases, deliberate government policy to direct aid effectively whilst expanding on other sources of finance has been critical to the positive impact of aid.

That said, the economic growth impact of aid is highly contested. Studies show no consistent positive impact of aid on growth. Many show the opposite.

But perhaps the most consistent criticism relates to the framework in which aid is provided, especially to Africa in the 80s and 90s.

Aid was used as both carrot and stick to force a complex, ambitious and comprehensive set of political and social engineering on countries with weak institutions and collapsed economies, using expensive Western consultants peddling best practices and universalist solutions.

Not surprisingly, these reforms largely failed and aid was hugely wasted.

However, even these were not always negative. Countries like Mauritius, which had the courage to promote moderate liberalization and some degree of industrial policy, prospered.

What is clear to me, though, is that even with the complexity, without aid, many countries cannot develop the capacities to produce the goods and services they can trade effectively in the international market.

This is why the "aid not trade" or "trade not aid" dichotomy is simply nonsense. Trade in predominantly primary commodities can provide no future of any country.

Countries need the technology, the investment in their human beings and in their infrastructure to have a chance of transforming their economies to produce value-added goods.

Aid can help, and does help, but deliberate government policies are necessary to see it decline as a share of national income.

Is aid good or bad? That depends on, among others things, the way it is provided, the motives behind it, what it is used for, the domestic policies and interventions to guide it, and the quality of political leadership.

In my view, aid works when its objectives are narrow and expectations modest.