Bristol Palin and future of marriage 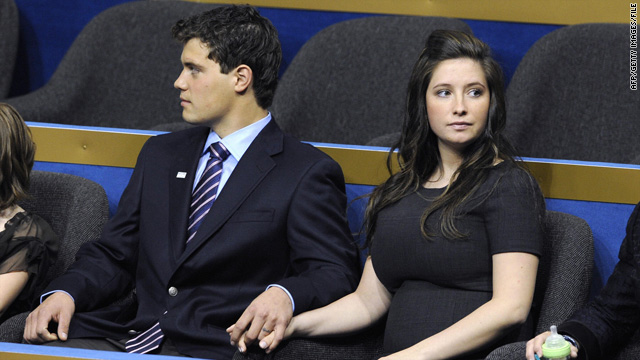 Levi Johnston and Bristol Palin, together at the Republican National Convention in 2008, reportedly have called it quits again.
STORY HIGHLIGHTS

Which event ultimately matters more to the future of the United States? I would argue: the Palin-Johnston bust-up. No, I am not kidding.

Think for a minute: Why do people oppose same-sex marriage in the first place?

They do so because they fear that otherwise America's young people will end up like ... Bristol and Levi: having sex and raising children without regard to marriage.

Here for example is the National Organization for Marriage, a leading opponent of same-sex marriage. The group warns that if same-sex marriage comes to pass, "The law will teach your children and grandchildren that there is nothing special about mothers and fathers raising children together, and anyone who thinks otherwise is a bigot."

If the law fails to uphold traditional marriage, the organization continues, children are more likely to be born outside marriage. And, it argues, "marriage matters because when fathers are committed to their children (and their children's mother!), children are most likely to thrive and women are spared the unfair burdens of parenting alone."

Those are important and valid warnings. A huge and growing body of social science research confirms: Children born outside marriage are less likely than the children of married parents to finish school, more likely to experience poverty, more likely to go to prison. These dangers accrue even if the mother is a post-teenager, even if she subsequently marries or remarries, even if the mother's own parents earn above-average income.

As always when dealing with human behavior, we're not looking here at an iron law. Lots of children who grow up in single-parent households turn out fine or better than fine; lots of children raised by intact couples get messed up anyway. We're assessing probabilities, not certainties. With that caveat, it can be said: The crucial variable in child welfare is this: Does the child live with both biological parents to the age of 18, yes or no?

But more vulnerable Americans have not heard the message.

As of 2007, the most recent year for which statistics are available from the National Center for Health Statistics, almost 40 percent of America's children were born outside marriage. If you are wondering why children born poor are having so much more trouble escaping poverty today than a generation ago, that statistic holds a big part of the answer.

A generation ago, unwed motherhood was often explained as a consequence of discrimination and poverty. Back then, unwed motherhood seemed a problem affecting black America only: The first serious modern work on unwed parenthood was written in 1964 under the title, "The Crisis of the Negro Family."

Discrimination, however, cannot explain why 28 percent of white women who gave birth in 2007 gave birth unwed, a higher rate than for black women in 1964. Among America's new largest ethnic minority, Hispanics, an outright majority of mothers, 51 percent, are not married.

When a "crisis" spreads to this extent, it's hard to continue calling it a "crisis." The behavior has become the new normal.

Which brings us back to Bristol and Levi vs. Judge Vaughn Walker. Bristol Palin is exactly the type of girl who would have been pushed into a "shotgun marriage" in 1964: Her parents were leading citizens first of their town, then their state, now the nation. Their position and reputation would have absolutely precluded an unwed mother in the family.

Not any more. Today, nobody expects it -- quite the contrary, when Levi reveals himself to be a jerk again, every People magazine reader in the country fully sympathizes with Bristol chucking him out, again. Get married for the sake of the children? Unwed motherhood as a disgrace? What is this, the Middle Ages?

Walker's decision was a twist in a complex legal story that stretches back to the 1990s. Many more twists lie ahead. The judge's decision will almost certainly be reversed on appeal. (Walker seems to know it, too: He suspended his own decision from going into effect until after the appellate court had its say.)

But we don't have to wait for the courts to finish their work to know the answer to the big question.