By Mia Farrow, Special to CNN 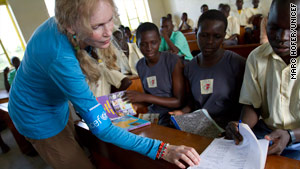 Mia Farrow visits a Ugandan school that has many students who had been abducted by the Lords Resistance Army.
STORY HIGHLIGHTS
RELATED TOPICS

Editor's note: Actress Mia Farrow has traveled extensively as an ambassador for UNICEF, including trips to Haiti, the Darfur region of Sudan and Angola.

(CNN) -- Ambrose was 8 when he was abducted by the Lords Resistance Army, the ruthless militia responsible for the massacre, rape, torture and mutilation of thousands of civilians in northern Uganda.

While he lived with the militia in the jungle, young Ambrose was forced to fight and to kill. Two years ago, at 12, he escaped.

Now an orphan, his home is a boarding school for hundreds of child victims of the LRA in Gulu, northern Uganda. I sat with the seventh-graders on a bench in a spare classroom. "Back then," Ambrose whispered, "I felt only like killing."

But despite all he has endured, Ambrose is not looking backward. He is focused on the future. "If only I could attend secondary school," he confided, "I long to be a doctor."

The LRA has been driven into neighboring Congo and south Sudan, but nearly two million traumatized people in northern Uganda are left struggling to recover from decades of terror, torture and displacement.

The chance of Ambrose realizing his dream is slim. There is no secondary school nearby, and private school would cost an impossible $500 a year. Ambrose has nothing but his dreams.

In the nearly two decades that I have been traveling through Africa, I have seen violence, hunger and all the ravages of poverty and irresponsible, corrupt leaderships. I have held babies who were dying of AIDS and starvation; I have spoken with child soldiers and with child victims of rape. I have sat with innocent women, men and children who had been mutilated or riddled by bullets or rocket-propelled grenades.

I met a man who told me he had eaten his belt because he was so hungry -- this while that man's president prospered. I have seen the worst that human beings can do to each other.

However, across this great continent, I have also been privileged to witness the very best of humanity -- an incomparable generosity, resilience, resourcefulness, courage and in the bleakest of circumstances, hope in every child's face, and a hunger for learning.

That hope and that hunger were evident late in July in Uganda's capital of Kampala, where more than 100 young men and women from 40 countries gathered for the UNICEF-supported African Youth Forum.

The forum, conducted under the auspices and in advance of the African Union Summit, offered a rare opportunity for the young people, who had been chosen for their passion and leadership capabilities, to discuss the primary issues facing their countries and their continent.

At the close of the third day and the commencement of the African Union Summit, they presented their recommendations to Africa's leaders.

Ambrose, in remote northern Uganda, was not present, but his longing for an education was a central topic at the forum.

There is a growing chorus across Africa calling for change. And at the top of their demands is the right for every child to an education. These are the voices of Africa's future.

Ideas were exchanged along with e-mails. Friendships were forged in multiple languages and a swirl of traditional attire.

While the group waited for an address by Ugandan President Yoweri Museveni, they took time out to dance to Shakira's "Waka Waka (This Time for Africa)."

With 62 percent of Africa's population younger than 25, they have the greatest stake in the future.

Yet, a stunning 51 percent of all deaths in Africa each year are of children younger than 5. An estimated 45 million African children do not attend school. Staggering numbers of women and girls die in childbirth.

Recently, the leaders of Africa agreed to provide 15 percent of their national budgets toward health care and 20 percent toward education. Most have not made good on that pledge.

The wealthier nations of the world have also committed themselves to help poorer countries achieve the Millennium Development Goals:

-- Reduce poverty and the unacceptably high rates of maternal and child mortality.

Ambrose's plea for an education was carried by his peers to the ears of his president and beyond. Educated young people are the promise and future of the African continent. Their leaders would do well to listen to them.

The opinions expressed in this commentary are solely those of Mia Farrow.