The tea partiers are half right 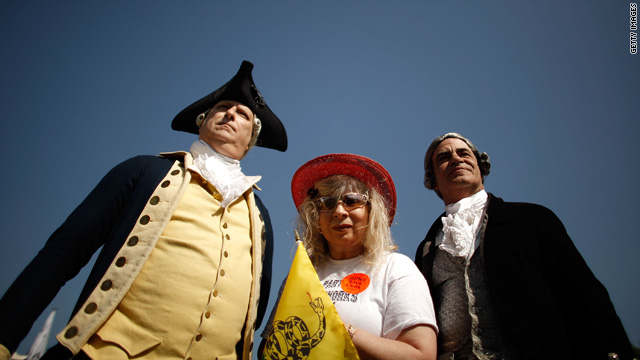 Editor's note: Amitai Etzioni is professor of international relations at George Washington University and the author of several books, including "Security First" and "New Common Ground." He was a senior adviser to the Carter administration and has taught at Columbia and Harvard universities and the University of California, Berkeley.

Washington (CNN) -- Several observers on the left side of the opinion spectrum write dismissively of the followers of the Tea Party.

About the kindest labels appended to them are "rednecks," "highly volatile" and "laughable." Young research assistants at George Washington University see them as "psychopaths," "racists," "anti-Semites" and "homophobes" and hold that, in the political arena, "one cannot talk to them; one must defeat them."

As I see it, it is never a good idea to dismiss out of hand a major social movement. One poll in December found the tea party movement was then viewed favorably by more Americans (41 percent) than either the Democrats (35 percent) or the Republicans (28 percent).

More importantly, the concern on the part of tea partiers that the government is not responsive to the interests and values of the majority is a valid one.

Whether the bank and auto industry bailouts, the huge economic stimulus package and the health care bill are good policies or bad --and will help the economy or hurt it -- they are not favored by the majority of Americans. And the things that people most care about -- the creation of new jobs and vigorous economic growth -- are lacking.

Even more important are the ways the bills were fashioned. There is a saying in Washington that one should never see the ways laws and sausages are made. Well, many people are choking on them even without knowing how they were concocted.

Those of us who follow politics closely have become inured to the fact that the bills that are finally enacted (often after months of haggling, slicing and dicing) are loaded with earmarks that favor some congressional districts or industry and are riddled with exceptions for special interests.

You may not wonder why the auto dealers won exemptions in Congress from the new financial regulations. But the behind-the-scene deals the White House has made are enough to make you sick.

These include deals with private hospitals to drop the public option in exchange for their support of the health care bill and with the pharmaceutical industry to block Americans from purchasing low-cost drugs from other countries.

Some of us have learned to live with these maneuvers as long as something comes out at the other end.

However, many Americans are busy working or looking for a job, taking care of their families and trying to find some spare time to follow their favorite sports team and have a beer. But when they are made aware of these shenanigans, they are nauseated. As they should be.

I choose my words carefully. I suggest that the sense of the tea partiers that they have been had is largely a valid one. At the same time, their ideas of what ought to be done are very much off the mark.

The desire to gut the government ignores the fact that there are many important missions that the government is best-suited to accomplish. However, before those of us who do not belong to this movement can carry this message to the tea partiers, we first need to validate their feelings, rather than dismiss them.

And we must be honest: Reforming the government so that it will be less captured by special interests and more responsive to the public interest is a difficult road to navigate.

Indeed, that road was recently made more difficult to navigate by a Supreme Court ruling that largely lifted the limits on legalized bribery, which is the proper name for allowing corporations and labor unions to make unfettered donations to the political campaigns of those who do their bidding.

The best we can offer is to point out that a major, populist social movement can serve to countervail special interests, as long as it sees its role as to straighten out the government, rather than to decimate it.

This is what the progressive movement of yore accomplished. However, we cannot have this very badly needed dialogue with the followers of the tea party unless we make it clear that we understand where they are coming from.