Why Obama's fate is tied to congressional Democrats 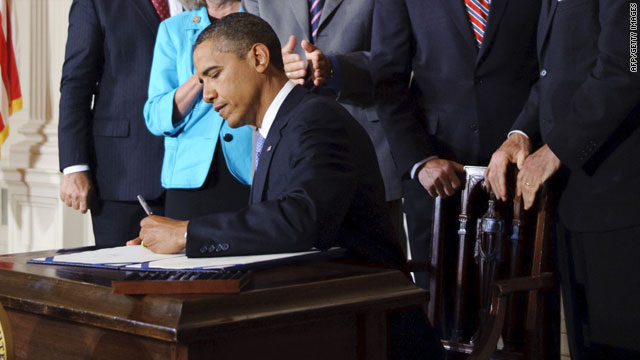 Speaking of achieving landmark legislation on health care and financial regulation, Pelosi said, "The leverage has changed. This doesn't happen in a Republican Congress. ... Understand what is at risk when we go into these elections 100 days from tomorrow."

These comments come after several weeks when there have been numerous signs that tempers are flaring between congressional Democrats and the White House.

When White House press secretary Robert Gibbs told NBC's "Meet the Press" that Republicans could retake the House of Representatives in November, Pelosi was not happy. At a private meeting with the Democratic Caucus, as well as with a White House aide who joined them, Democrats expressed their frustration.

According to several news reports, Pelosi asked: "How could [Gibbs] know what is going on in our districts? Some may weigh his words more than others. We have made our disagreement known to the White House."

The president has not been sensitive enough to the fact that his fate rests on the fate of congressional Democrats. Obama can't separate himself from his party regardless of how much his agenda and political interests might differ from theirs. This is particularly true in an age of intense polarization, when winning bipartisan support is virtually impossible on most legislation.

The deputy Republican whip in the House, Tom Cole, told The Washington Post, "We're very comfortable where we're at; we have very few members who feel endangered. We feel like we are reflecting a broader mood of dissatisfaction. Right now, the American people want us saying no."

Obama must address the growing rift with congressional Democrats soon or he can face massive political consequences for his presidency and his party. If Republicans retake control of Congress in November or significantly narrow the Democratic majority, they will be able to stifle any progress on Obama's legislative goals and they will be able to shift political debate quickly toward their agenda.

President Obama will find himself on the defensive, and Republicans will find a political base from which to rebuild the strength of their party.

The past year and a half have been bruising for Democrats on Capitol Hill. The sluggish economic recovery and two wars have left many constituents drained and fearful. In addition, the president has asked congressional Democrats to carry his water on hugely controversial pieces of legislation: health care and financial regulation.

After all these fights, congressional Democrats seem to have angered almost everyone. The bills have triggered enormous opposition on the right and stimulated the kind of conservative activism that seemed moribund in 2008. Many independent and moderate voters in Democratic districts and states are nervous about the party in power. Even liberals are disappointed, feeling that none of this legislation went far enough.

If the tensions become worse, Obama can find himself politically hamstrung in his final two years. When presidents don't nurture their congressional base, the White House usually finds itself isolated in difficult times.

President Jimmy Carter is the classic example. He focused on a series of controversial proposals in his first two years, such as energy reform and the Panama Canal treaties that did little for congressional Democrats whose constituents wanted relief from stagflation.

President George H.W. Bush also angered members of his own party. In 1990, Bush agreed to a deficit reduction plan that included a substantial tax increase. By signing onto the package with the Democratic Congress, the president abandoned his campaign pledge not to raise taxes and violated a signature tenet of the conservative movement. Minority Whip Newt Gingrich and his allies were furious with Bush and refused to provide him support in the final two years of his presidency.

Other presidents have done a better job at managing intra-party tensions. President Ronald Reagan, who often faced enormous criticism from congressional Republicans, delivered enough with issues such as tax cuts, military spending and deregulation that -- combined with economic recovery after 1982 -- left him in relatively solid standing with his party by 1984.

President Bill Clinton, who angered many congressional Democrats in his first term by signing legislation such as the North American Free Trade Agreement, gradually won back the support of his party. After Republicans took control of Congress in 1994, he painted the GOP as extremists and undercut some of their legislative strength.

The thriving economy left many Democratic incumbents with happy voters. Ironically, the drive to impeach Clinton united congressional Democrats around the White House, even those who were never fully comfortable with his presidency.

Most recently, even as troubles mounted in Iraq, President George W. Bush was able to keep most congressional Republicans loyal to his agenda until the end of his presidency. Although questions emerged about his ability to govern and about Iraq, Bush's war on terrorism and his economic policies offered Republican legislators programs they could promote with their constituencies.

Despite the words exchanged among Democrats, Obama has not yet faced the problems that Carter or George H.W. Bush confronted. Most Democrats are still assuming he will be the nominee in 2012, and they feel that he can deliver the kind of legislative program that can boost their standings. Moreover, the level of polarization is so intense that the primary focus of Democratic anger remains the GOP.

But that can all change quickly, and both Carter and Bush saw it happen. While there are ample reasons for dealing with difficult issues such as immigration or climate change over the coming year, Obama must make reducing unemployment his No. 1 priority. All of his energy and all of his capital must be devoted to easing the economic insecurity that now plagues so many parts of the population.

If the president can't do more to improve economic conditions and continues to hand his party colleagues politically explosive bills over the coming years, bad feelings can become as big a problem for this White House as the opposition it faces from the other side of the aisle.