Korea, 60 years ago and now 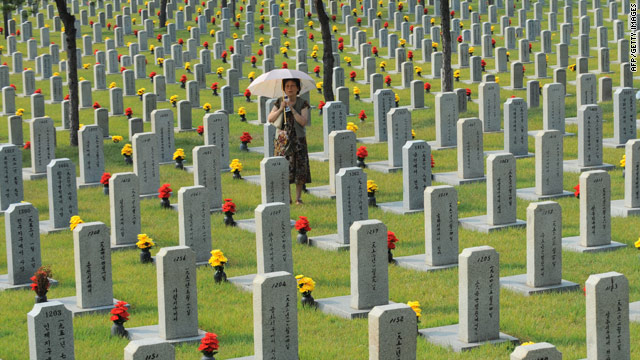 A woman looks at the tombstone of her elder brother, who died in 1951 during the Korean War, at a national cemetery in Seoul.
STORY HIGHLIGHTS

Seoul, South Korea (CNN) -- A bronze statue was unveiled in Seoul on June 22, honoring a young American hero who fell in the battlefield in September 1950. A doctorate candidate of honor at Harvard University, William Hamilton Shaw did not hesitate to answer the call to defend Korea and protect freedom and peace.

The Navy lieutenant fought courageously, being proud to be among the U.N. troops led by Commander-in-Chief Douglas MacArthur in the blitz Incheon landing against the North Korean Army. His dream of becoming a philosopher was cut short at the precious age of 28.

Still, his noble spirit remains alive in the hearts of Koreans, who remember his sacrifice for a cause greater than his life, for the ideals most cherished by all humanity.

The War was savage and destructive. Within a year of its outbreak, Seoul had changed hands four times and was in ruins. By the end of the War in 1953, the capital's pre-war population of 1.5 million was down to 200,000, with people suffering from chronic and severe food shortages.

The rest of the country fared no better. Beside the unimaginable toll on human lives, whatever meager infrastructure there had been simply no longer was.

Sixty years later, the whole country is bursting with pride, as Korea successfully wins a bid to export a nuclear power plant to the United Arab Emirates, and as we stand to chair the 2010 G20 Seoul Summit and host the Nuclear Security Summit in 2012.

To each of the 21 countries that sent its sons to defend Korea, we owe a great heartfelt debt of gratitude.
--South Korean Prime Minister Chung Un-Chan

Starting from no capital, no infrastructure, and little human resources, we have come a very long way indeed. From a per capita income of 67 U.S. dollars at the end of the War, we attained 20,000 dollars in 2007, and total GDP grew 745 times during that time. Much of this was achieved through our own efforts and sacrifices.

As a former economics professor, I must say that strong investment in human capital was the essential sine qua non that propelled Korea's economic growth. Next to that, stable politics provided a good backdrop, but the authoritarian rule that guaranteed three decades of stability and a relentless focus on growth-oriented policy also did exact personal tolls.

But, as much as we have to be proud of, we always bear in mind that we also have much to be thankful for. And the 60th anniversary of the Korean War is a very appropriate occasion for expressing our deep appreciation.

For the Republic of Korea's very survival and her subsequent achievements would not have been possible without the generous help from our friends. To each of the 21 countries that sent its sons to defend Korea, we owe a great heartfelt debt of gratitude.

The United States is also remembered by Koreans as a most generous benefactor who helped us through the crushing poverty of the post-War years, as well as the early years of the economic growth drive that began in the 1960s.

Roughly half of the Korean government's expenditure was financed at that time by aid from the United States. Your help not only enabled us to build our first factories and plants, but also fed the workers and our schoolchildren through their education.

Sixty years from the Korean War, we can now answer a question that many people from the 21 countries must have asked: "Why are our sons called to give their lives to defend a country that they never knew and a people they never met?"

We have taken that opportunity and have built a strong economy and a robust democracy. Our success provides a model case that is studied by many developing countries, and we are eager to share our experience with them.

Once a poor recipient of international aid, Korea has now become a donor country willing to give back to the international community the kind of help she received in the past -- to help in giving other countries and other people a decent chance for something better.

The threat to peace still lingers over the Peninsula sixty years after the Korean War, as evidenced by recent tensions over the North's nuclear experiments and the sinking of a Korean naval vessel, the Cheonan.

But we have faced similar challenges in the past, and with staunch support from the international community expect to prevail this time, too, in our efforts to secure peace and prosperity. Indeed, we can do no less to honor the ultimate sacrifice made by so many during the War to uphold those noble ideals.

To those who gave their lives to help us in the Korean War, to their families and friends, to Americans and the people of other countries that have helped us through the War and subsequent years, I hope that what Korea has achieved can stand as a worthy answer for your sacrifices.

The United States of America, the United Kingdom, Turkey, Australia, Canada, France, Greece, Colombia, Thailand, Ethiopia, the Netherlands, the Philippines, Belgium, South Africa, New Zealand, Luxembourg, India, Norway, Denmark, Sweden, and Italy, from the bottom of my heart, and on behalf of Koreans, thank you.