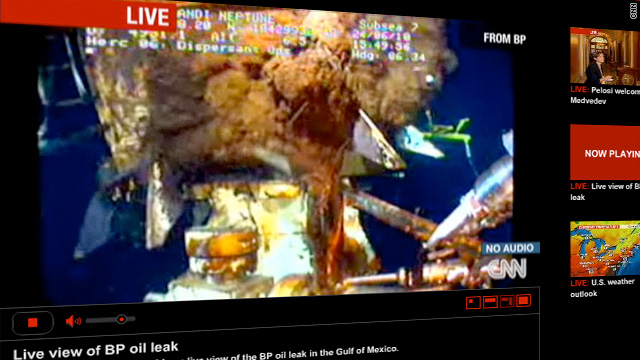 (CNN) -- It's beginning to feel like this has been with us forever.

And harder for us to believe that one of these days, or months, or years, it will be gone.

It's the live video feed from the bottom of the Gulf of Mexico. When BP engineers lowered those cameras in the first place, you can bet they never imagined that the resulting pictures would be watched by hundreds of millions of infuriated people around the world.

They were for in-house use -- to monitor the well, a well that was intended to be an uncontroversial source of enormous profit for the oil company. The cameras were like the security cameras that most corporations install around their office buildings. Just a little something so the bosses can keep their eye on things.

No wonder the BP executives at first fought off requests that the television pictures from the Gulf floor be made available to the public. Think back to the early days of the spill. Experts were theorizing about how much oil was billowing, but BP had a little built-in breathing room. They were seeing how bad the leak was, but as long as the rest of the world wasn't, there was a chance to keep things relatively calm.

The ceaseless image of the oil spewing has become like an international night light -- except without the comfort. It's always there. We can count on it, even though we'd prefer not to.

It has become the logo of the disaster. It is a ghastly portrait in perpetual motion. Every time there is a dash of hope that the oil will stop gushing, something newly bad happens. In recent days, it was the temporary removal of the containment cap deep in the Gulf. The oil surged harder. And we, in our spare moments, watched.

The television feed is like a heartbreaking mutation of those lava lamps from the 1960s and 1970s -- those oddly shaped doodads with the colorful churn of liquid trapped inside, an undulating mixture hypnotic in its incessant and random kinetic swirl. The terrible difference, of course, is that the frantic churn from the oil pipe is not trapped. It is freely headed toward unwelcoming shores.

We don't know what it sounds like. That's what is missing: a roar. Because there is no audio track that accompanies the pictures we see, the images are even more otherworldly. They might as well be emanating from a distant solar system. Except, day by day, they become more real as the repellent rush they reveal fans out to soil the outer edges of our country.

The bottom of the seas, the dark majesty of their depths, has through history been bathed in mystery. The appeal of books and movies such as "20,000 Leagues Under the Sea," the power of the stories, has derived from our fascination with, and fear of, that which we could not see. Which is what makes the digital clarity of the BP pictures doubly disorienting. They're so sharp, almost mundanely so. They're like home videos, except hateful. "Just plug the hole," people say. The hole looks so close. If we didn't know better, we'd think that we could touch it.

The pictures that never pause have already, in their potent silence, begun to transform the way people think about drilling. Movies have traditionally made oil wells appear to be the definition of good fortune: "We've hit a gusher!" Television shows have played wells for laughs. What were those words from the theme song of "The Beverly Hillbillies"?

"And up through the ground came a-bubblin' crude.

That's what the song said. Official summer arrived last week; there was so much news going on, it was easy to miss it. Every summer has a song by which people will remember it -- the one which, years later, they will think about every time they recall that year.

This year, the song of the summer most likely won't be a song at all. And it won't be cheery or washed in warm nostalgia.

It will be that unending picture. The ugly torrent we see every day.

Someday the picture will be gone.

No one, if they're telling the truth, knows when.

The opinions in this commentary are solely those of Bob Greene.