Take politics back from the extremes 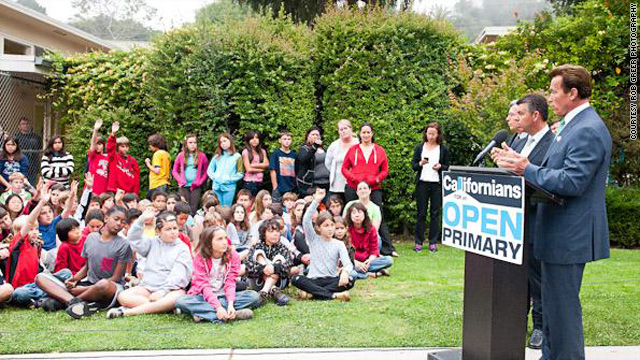 Editor's note: John P. Avlon is a CNN contributor and senior political columnist for The Daily Beast. He is the author of "Wingnuts: How the Lunatic Fringe is Hijacking America."

New York (CNN) -- Meg Whitman and Carly Fiorina grabbed the headlines out of California's primary vote last week. But the most important decision California voters made had nothing to do with nominating two technology industry CEOs to run for governor and senator.

Hiding beneath the bland ballot label "Proposition 14" was nothing less than a revolution against partisan politics as usual. It will replace the current closed partisan primary process with an open primary where all voters will be given a chance to select the candidate they like best, regardless of party. The top two vote getters will then face each other in the fall.

This is bad news for the professional partisans and polarizing candidates who have ridden play-to-the-base politics to electoral dominance in recent years. It's good news for the embattled centrists of both parties -- and for independent voters who have been shut out of the primaries, despite the fact that they are the largest and fastest growing segment of the American electorate.

Proposition 14 passed with broad support despite the opposition of the two parties. The only two California counties where it didn't pass are symbols of polarization on opposite sides of the spectrum: conservative Orange County and liberal San Francisco.

Gov. Schwarzenegger spoke for voters in the vast vital center: "We in California have said we've got to come together in the center, we've got to bring everyone together in order to solve problems ... and I think the rest of the nation will finally find out this is exactly where the action is."

Oregon may be the next state to take on the open primary fight, now that its neighbors California and Washington State have taken the step. As former Oregon Secretary of State Phil Keisling wrote recently in the New York Times, "The primary system gives disproportionate power to the shrillest and most mean-spirited of our partisans, while preventing civil dialogue and progress on a host of important issues. But a 'fully open/top two' system would empower every American to be able to vote for the best candidate in every election."

Seventeen states currently have some form of open primaries in place, and there is an additional consideration that may help its spread to other states -- why should the two parties have access to taxpayer money to conduct their primaries but systematically exclude citizens who aren't party members from participating?

But open primaries are just part of the prescription for election reform. Redistricting reform efforts are underway in states across the nation, trying to overturn the rigged system by which partisan politicians draw congressional district lines to virtually ensure re-election -- instead of voters choosing their politicians, politicians are choosing their voters.

Because this segregation-by-political-affiliation effectively ends competitive congressional general elections, the only real contests occur in partisan primaries. This forces the power in our politics to the margins -- after all, in a closed partisan primary that only gets 10 percent turnout, 5.1 percent of the electorate makes a majority -- helping to explain the disproportionate influence of ideological activists on our politics.

There is a growing awareness about this destructive dynamic -- there is even a new documentary on the subject titled "Gerrymandering: The Movie."

California voters approved a redistricting reform bill in 2008, after partisan special interests helped stop an earlier ballot reform effort in 2005. This year, New York gubernatorial front-runner Andrew Cuomo -- New York's current attorney general and son of the former governor -- has tried to embrace the mantle of reform by running against the Albany establishment of his own party in the process. He has forcefully backed an independent commission that would draw district lines.

In Florida and Minnesota, voters will be able to vote on redistricting reform measures this fall, while efforts in Illinois and Virginia were derailed because of backroom deals. Redistricting reform efforts in Ohio are still under way, despite attempts to block them by the legislature before an August 4 deadline.

Fighting for election reform is a constructive outlet for rampant voter anger. If we enact non-partisan redistricting reform with competitive general elections and open primaries, it will have a calming effect on our contorted civic discourse.

It will empower the moderate majority rather than the extremes and help heal the harsh but artificial polarization of Americans politics.