Jindal's passion on spill is presidential 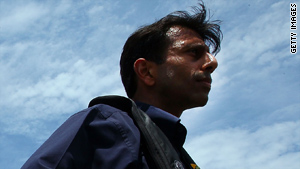 San Diego, California (CNN) -- Out: Harvard Law School graduates who are scary smart -- having served as editor of the Harvard Law Review -- but come across as unemotional, aloof and uninterested in the demands of leadership even during a national catastrophe.

In: Rhodes scholars who are scary smart -- having been admitted to and turned down both Harvard Medical School and Yale Law School -- but also known to show flashes of rage at federal bureaucratic ineptitude during a national catastrophe.

For the last few years, Republicans have wondered if Bobby Jindal was their answer to Barack Obama. After the oil spill in the Gulf of Mexico, it's awfully clear that Democrats should start trying to come up with an answer to Jindal.

The nation's first Indian-American governor was asked recently during a television interview if his state would be able to come back from its latest disaster. Of course, Jindal said. After all, he knows something about resurrection.

According to some pundits, Jindal's political career supposedly died in February 2009 when he did a lackluster job in delivering the official Republican response to Obama's address to a joint session of Congress. The president had just laid out plans for an economic stimulus.

Jindal managed to irritate members of his party by invoking a phrase that many in the GOP have stricken from their vocabulary -- "Hurricane Katrina." Those who believed Obama's promise to rescue the country from economic turmoil, Jindal said at the time, should take a lesson from what happened during Hurricane Katrina when people waited to be rescued and the federal government never showed up. He apparently forgot that, at the time, the federal government was under the control of a Republican named George W. Bush.

Round One of Barack vs. Bobby went to the president.

Now, due to the oil spill in the Gulf of Mexico and Obama's lackluster response -- which has irritated and even enraged some members of the president's own party -- Bobby has Barack on the ropes and he is coming across as more passionate and more presidential.

Jindal is demanding more involvement, more cooperation and more urgency from the federal government. Specifically, he wants Obama to use the power of his office to cut some of the bureaucratic red tape that seems to be tying up Louisiana's request for permission to build sand barriers that might stop the flow of oil onto shore. It's a simple request, and failing to honor it makes the White House look as if it is insensitive, incompetent or petty.

Why petty? Because before that one mediocre speech, Jindal -- who had been widely talked about as a possible running mate for John McCain in 2008 -- was often mentioned by political observers as a possible Republican vice presidential or even presidential nominee in 2012.

Is this White House so plotting and sinister that it would actually let political considerations -- in this case, a reluctance to enhance the standing of a potential rival -- interfere with its duty to protect and serve the people of this country? When it comes to politicians and the games they play, nothing surprises me. We'll have to wait and see.

But for now, Round Two goes to Bobby.

I'm not the only one keeping score. It's significant that Obama's performance in the Gulf has been so bad that he earned criticism from a pair of staunch Democratic allies -- James Carville, a Louisiana native who has a stake in this crisis since he recently moved his family from Washington to New Orleans, and Paul Begala, who is from neighboring Texas. Both of these political pros have been critical of Obama's hands-off approach.

Yet they've had mostly nice things to say about Jindal. Last week, during appearances on various CNN shows, Carville praised the governor, insisting that he had the right idea as to how to protect the shoreline and suggesting that Obama should follow his lead. And Tuesday, when Jindal went after the federal government and again pleaded for them to lead, follow or get out of the way, Begala used an appearance on "The Situation Room With Wolf Blitzer" to label Jindal's speech "a terrific performance ... because he's conveying urgency." And, Begala said, that's what people want to see right now.

Meanwhile, Carville has been criticized, in The Washington Post, by anonymous sources within the White House as not knowing what he is talking about when he says that the administration hasn't been sufficiently engaged.

I'm not surprised. If there is one thing in which these folks are well-versed, it's protecting their own jobs by defending themselves against criticism. Now if only they could replicate that passion when it comes to defending Louisiana and the other Gulf Coast states against an approaching sea of crude.