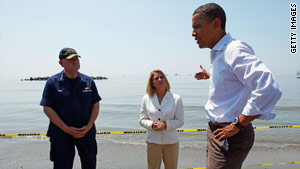 Editor's Note: David Gergen is a senior political analyst for CNN and has served as an adviser to four U.S. presidents. He is a professor of public service and the director of the Center for Public Leadership at the Harvard Kennedy School.

(CNN) -- Enough is enough! After the latest failure by BP to plug the gaping hole, it is time for President Obama to take full command of this growing national catastrophe. Immediately!

The president in his press conference this past Thursday assured the nation that he and his administration were already in charge and he has manfully taken personal responsibility -- "the buck stops here," he said, echoing Harry Truman. Well, it may be true that BP has been acting all along under the oversight of the federal government, but that supervision has been loose and ineffective.

To the world, it has been apparent that the government has been riding shotgun and BP has been at the wheel. It's time for the White House to get in the driver's seat and get us to safety -- fast.

First off, who can now trust BP to do the job right? From the beginning, it has appeared to be more interested in shoring up its stock price than in playing straight and solving the problem. It took reckless short cuts in opening up the rig, had no serious plan in place for a disaster, low-balled early estimates of the spill, has high-balled its chances of stopping the leak and has kept both the government and the public too much in the dark. And its efforts on shore are increasingly pathetic -- can it really have failed to protect the safety of beach workers and have stage managed the clean-up when Obama was there, as reported? It was a mistake to leave our fate in the hands of this company as long as we have.

Video: Is the clean-up working?

Second, even if BP were reliable, the problem has clearly become too big for it to handle, as Colin Powell is now arguing on television. We have been told for days that the top kill procedure was BP's best hope for stopping the leak and if that failed, we would likely have to wait until BP drilled new wells which might be as late as August. We can't wait that long. BP is especially not up to the task of protecting our precious shorelines and cleaning up the beaches. For that, we need the organizational strength of the U.S. military.

Third, this catastrophe is increasingly threatening the nation's welfare. With a potentially dangerous storm season just around the corner, a continuing gush of oil will not only pose huge, long-term damage to the Gulf region but could easily wash the oil around the tip of Florida and up the East Coast. The loss to livelihoods, the economy and to ways of life would be immeasurable. It would be worse than Katrina and Exxon Valdez put together. Unless we solve this soon, this spill could do to off-shore drilling what Three Mile Island did to nuclear power -- darn near kill it. Obama is right that it is a wake-up call to end our addiction to oil, but we need some forms of off-shore oil as a bridge to that future.

Finally, Obama's leadership is increasingly at stake in this emergency. I thought Peggy Noonan was premature in arguing in the Wall Street Journal this weekend that the spill has already broken his presidency, but her column certainly gave pause. The cameras down at the bottom of the sea give us vivid reminders that this oil is spewing forth day after day after day -- almost like the daily television reminders we had of how long our hostages were held in Teheran while Jimmy Carter sat helplessly in the White House, the authority leaking out of his presidency.

What can the White House do? For starters:

-- Set up a daily command center in Washington where a presidentially appointed leader runs the show, calls the shots, coordinates the overall effort, briefs the president and briefs the country

-- Have two deputies, one to direct the leak-stoppage and the other to direct the clean-up. Ex-CEOs and generals would be excellent candidates

-- Get BP out of the picture for clean-up; just send it the bill. If it is still needed for hole-plugging, okay, but ensure that it answers every day to directions from the government. If BP needs new internal leadership, figure out how to get that done

-- Employ the U.S. military for organizational coordination and where needed, for anything else such as clean-up

-- Provide the country with the kind of daily briefings that the military has mastered for wartime -- bring in people who are smart, straight and tough

-- Ensure that economic assistance is provided to families, small businesses and communities that need it with dispatch and generosity

-- And finally, very importantly, exercise the powers of leadership every day from the Oval Office

The whole country now has a keen interest in the White House now taking full command. Mr. President, it's your move. The nation cannot afford to wait that long -- the government needs to summon all the big oil and drilling companies to the White House on an emergency basis and seek faster answers.