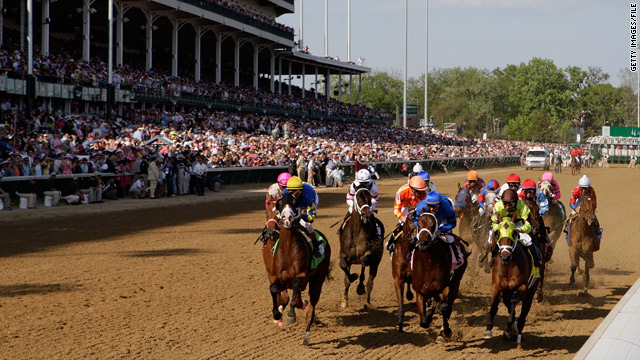 New York (HLN) -- It's racing season in America! The Kentucky Derby is this weekend. Then it's the Preakness and the Belmont Stakes. Get out the fancy party hats and pop the champagne!

But it's not a cause for celebration for America's horses. These magnificent, yet voiceless, creatures cannot tell you about the exploitation underlying America's racing industry.

Despite the myth that they end up knee-deep in grass on some idyllic farm, the reality is that horses are very expensive to keep. When they outlive their usefulness, they often are sent on a hellish journey that ends in a slaughterhouse. Toward the end of the line, these horses are sold priced per pound.

I know. I've bought perfectly healthy horses for a couple of hundred dollars just as they were about to be loaded on a slaughterhouse-bound truck.

The fortunate few end up at a sanctuary. The others are bought at auction, end up in overloaded trailers and travel thousands of miles without food or water to the slaughter plant. Some are dead on arrival.

According to the Humane Society of the United States (HSUS), tens of thousands of live horses are transported every year across the border to slaughterhouses in Mexico and Canada.

Part of the problem is that the horse racing industry breeds for perfection. For every stallion or mare that looks like a winner, an untold number of foals get left in the dust. As the saying goes, they can't all be winners ... and they can't all be riding or school horses either.

There is a severe horse overpopulation crisis caused by overbreeding in the racing industry. It's time for that industry to accept responsibility for its castoffs and take dramatic action to protect a species that has so loyally served humankind.

They've got the money to create enough retirement homes to accommodate all the horses that pass through their gates.

Horse lovers won a huge victory when America's foreign-owned horse slaughterhouses were shut down several years ago. Before that, the HSUS estimates 100,000 horses were being slaughtered every year in America. Ever since, horse slaughter proponents have aggressively campaigned to reopen such plants, despite public revulsion.

For too long, Congress has been mulling over a Horse Slaughter Prohibition bill (H.R. 503) that would "prohibit the shipping, transporting, moving, delivering, receiving, possessing, purchasing, selling, or donation of horses and other equines to be slaughtered for human consumption, and for other purposes." This bill passed in the House of Representatives in 2006, but languished in the Senate.

It's time for compassionate Americans to send a wake-up call to their members of Congress and demand passage of legislation to end the wholesale slaughter of America's horses once and for all.

Then, the racing industry will be forced to do something about its addiction to breeding. The time to be oh-so-polite about the industry's dirty little secret is over. This secret is out of the gate. Now, the race to end the cruelty must begin in earnest.