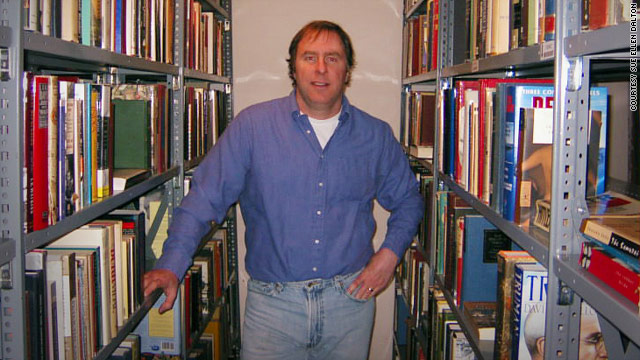 (CNN) -- I wish the titans of Wall Street could meet Mark Dalton.

Not that it would be likely to change anything. But I wish the leaders of Goldman Sachs and of the other big banking firms could talk to Mark Dalton for just a few minutes.

They might learn a few things about how to better connect with the American people.

I didn't know Dalton's last name until a few days ago. For almost two years, I've held onto something he mailed to me. There was no reason not to throw it out, yet I had a feeling that someday I'd want to refer to it.

That day is now. With the public's wariness of Wall Street growing, with Goldman Sachs being accused of fraud by the Securities and Exchange Commission (even as Goldman was announcing first-quarter profits of $3.46 billion, nearly twice as much as in the first quarter a year ago), with investors wondering if they're being given a fair shake by the firms to which they have entrusted their money, Mark Dalton's way of doing business might be worthy of at least a moment's attention.

I came across him quite by chance. I occasionally purchase used books -- titles that have gone out of print. Sometimes I will place my orders through Amazon.com, which offers an online marketplace for local used-book merchants around the country.

In 2008, I found a book I was looking for on that Amazon marketplace, and submitted an order. The price was more than reasonable: $6.95 for the used hardcover. Used books are not shipped by Amazon itself, but by the local booksellers.

A week or so after I placed the order, the package arrived, from High View Books in Smithfield, Rhode Island. The book seemed to be in good shape. I was pleased.

But with it was a personal letter to me. It said:

"Thank your for your recent book order. I have enclosed a check to you for $2.95. The reason for this is that this book is only in 'Very Good' condition, while I mistakenly described it as being in 'Near Fine' condition in my listing. Please accept my apologies for the error. (Also, please note, the soiling that you see on the dust jacket is actually on the Mylar and not the dust jacket itself.)"

He wrote that he hoped his apology and the refund were satisfactory. Sure enough, tucked into the book was a check made out to me, for $2.95.

I was surprised by the gesture. Yes, in his online listing for the book he had said it was in "Near Fine" condition, but who really knows what those designations mean? You see them all the time describing used books: "Fair," "Good," "Very Good," "Near Fine," "Fine"-- they would seem to be approximations. I had no complaints about the condition of the book I had bought from him. If I had paid $6.95, and he had refunded $2.95, and Amazon had taken its commission, how was he supposed to make a living?

I mailed his check back to him, thanking him for it and telling him how impressed I was with the way he did business. I told him I could not accept the refund.

And for some reason, I couldn't toss the letter. It made me feel hopeful about certain things.

With Wall Street losing people's confidence in recent days over the way it is alleged to treat its customers' money, I got the letter out again. He had just signed it "Mark at High View Books"; I was able to find him in Smithfield, which is how I found out that he was Mark Dalton.

He seemed as surprised to be hearing from me as I was when I had gotten his refund check. He's 42 years old; High View Drive is the street on which he lives, and his used books -- about 4,000 of them at last count -- are kept in his garage.

He said that his wife is a schoolteacher; without her salary, he couldn't make it. He said he tries to run his business professionally and in good faith, but is finding that the results "are pretty pathetic, dollar-wise."

I asked him the question that had been in the back of my mind since I first heard from him: As he was struggling to make a living, why, exactly, on my $6.95 order, had he decided to send me that refund check for $2.95? He couldn't have been making much of a profit on the order in the first place.

"I just try to do things right," he said. "When I went to mail that book to you, I must have noticed that it wasn't in as good a condition as I had promised on my Amazon listing. I want my customers to be happy and to believe I'm being fair with them."

Such a simple proposition. Yet with the financial news we've become conditioned to reading about. . . .

I asked Dalton if he had been following the recent reports from Wall Street. He said he had.

"I suppose if you're in charge of a multi-billion dollar bank -- billions in profits, millions in bonuses -- maybe you can lose sight of where you came from," he said.

As for his own business: "I know I'm doing it right in how I treat my customers, and that gives me peace of mind, but it's not generating the results I had hoped." He said he is considering looking for some other kind of work.

I thanked him again for that letter he had sent to me two years ago, and he thanked me again for remembering. By his own admission, as a businessman he lacks the killer instinct, the appetite for working the angles; he would undoubtedly be an abject failure on Wall Street.

If only it weren't so.