Back from Iraq war, and alone

By Mike Scotti, Special to CNN 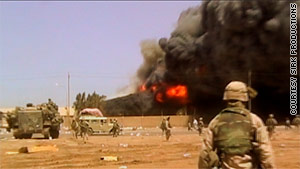 Mike Scotti filmed scenes of Iraq combat which are featured in a new documentary, "Severe Clear."

Editor's note: Mike Scotti served as a U.S. Marine in Afghanistan in 2001 and Iraq in 2003, and is a founding board member of Reserve Aid, a military-themed, nonprofit charity. He is the founder of the Military Veterans Club at the NYU Stern School of Business and is the subject of the documentary film "Severe Clear," which opens in New York on Friday.

New York (CNN) -- A few days after I had returned from a six-month deployment to Iraq, my second sojourn in the Middle East since 2001, I remember feeling like I was an alien creature from some other planet.

It was 2003, and I was attending a friend's wedding. As I sat at the table listening to the conversation, I suddenly realized that someone who had never been in combat could never even remotely understand what I had just been through.

I looked around. The chamber music quartet, the beautiful bridesmaids, the steak dinner ... none of it was real. My buddies were, at that moment, probably on patrol and quite possibly engaged with the enemy. That was real.

And as for the other guests at the table who were staring at me in my dress blues, we were no longer even the same species.

As the Iraq war winds down and those troops return home, and as other soldiers and Marines cycle in and out of Afghanistan, a new generation of Americans --vets' family members, friends and co-workers, a population basically untouched, unbothered by the fact of a faraway war -- will have to develop a fresh mindfulness of what these hundreds of thousands of men and women have been through and may be struggling with when they return.

There is a new generation of combat veterans and, as I discovered through personal experience, we all must be conscious of what, exactly, this means.

When I returned I became aware that, though I had hoped my days on the battlefield were finally over, I was in for one last fight. There was a new and unexpected foe: the feeling of isolation from the people all around you at home.

Their complaints seem trivial: The plane is delayed 30 minutes. They put onions on your sandwich. You don't like your job. "You think you got problems, pal?" is the thought that would go through my mind. I would think of the people I knew that were still over there -- in convoys hitting IEDs that rip apart armored vehicles and the troops inside them, or on patrol caught in a firefight in some dusty alley somewhere. Or of close friends that I had already lost.

This sense of isolation, if not dealt with, can quickly lead to problems with loved ones, with colleagues or worse; self-destructive behaviors feed upon themselves, pulling the vet down the wrong path. The isolation can also manifest itself in feelings of anger or resentment.

For the first year after I returned from Iraq, the only people to whom I felt really connected were those who had served in combat -- in any war -- or those who had lost family members on 9/11. In my mind, they were the only ones who "understood."

For warriors who return and have fulfilled their active-duty obligation and swing from active military service in a war zone to becoming a civilian in a matter of days, the transformation is particularly traumatic. What's more, because there is no draft in the United States, there is a far smaller pool of the nation's population serving in conflicts or with military experience, unlike during World War II or the Vietnam War, making the search for shared understanding and a connection even more challenging.

The Iraq and Afghanistan Veterans of America brilliantly portrayed this feeling of isolation in a 2008 ad where a soldier returning from the war walks through an empty airport. He continues through downtown Manhattan, which is also completely empty. No cars. No people. It isn't until a young veteran approaches the soldier with a handshake, a smile and pat on the back saying, "Welcome home, man," that the street becomes populated.

I was a bit shaken the first time I saw it, as it immediately resonated with me. It hit an exposed nerve, and I knew that those guys at the IAVA "got it." They knew exactly where we were coming from.

The problem, of course, is that we, as veterans, live the rest of our young lives in the "civilian" world and not on the battlefield. It took me several months to fully comprehend this. After realizing that my sense of isolation was alienating me from those I loved, I made the conscious decision to use my experiences in combat as a source of great strength, versus letting them become a weakness.

I realized that I just needed to "Let it go, man. Just let it go." Choose the high road. Take the "good" lessons learned from war -- the initiative, focus, discipline, attention to detail and strategic planning -- and apply them to everyday life. Drop the bad, the resentment, anger and isolation. There is no place for any of them in a happy, healthy or successful person's mind.

In the years since then, I have embarked on two key missions: to help the families of veterans in need and to tell the world the story of what it is like to serve in combat.

The first mission was to help provide financial support to those who have been adversely affected by being called to active duty. The platform to do so is a nonprofit charity I helped found five years ago called Reserve Aid , which has helped several hundred veteran families cope financially with deployments, including providing short-term relief for many servicemen and women who have been wounded, but who may have delays in getting disability benefits. To date, Reserve Aid's grants top $3 million, money donated by individuals, through corporate matching programs and direct corporate giving.

The second mission was to tell the world what it is like to be in combat and to hopefully create a "shared experience" to help bridge the "isolation gap" -- to educate the people who have not served about what it is like for those who did. The film ""Severe Clear" is a cinematic representation of my experiences in the war, using footage shot by me and other Marines, and it does just that. Set as a first-person narrative, it offers an unflinching, uncensored look at what it is like to fight a war.

I believe it captures the chaos and complexity of it all, and intimately reveals the human elements of combat. And I think it is unique because it is a story told by someone who is actively engaged in fighting the war, and it bares all: the good, the bad, and everything else in between -- the parts of war that the rest of the nation should understand.

The opinions expressed in this commentary are solely those of Mike Scotti.