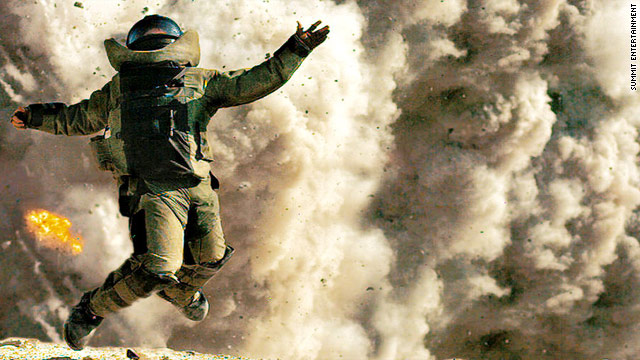 (CNN) -- Oscar-nominated screenwriter John Milius, author of some of Hollywood's most famous lines from films such as "Apocalypse Now," "Dirty Harry" and "Jaws," is a student of history -- especially the history of war.

Five years after his HBO's mini-series "Rome," Milius is currently in pre-production on an epic film about the life of the infamous warlord Genghis Khan.

Milius, who penned legendary lines such as "Apocalypse Now's" "I love the smell of napalm in the morning," and "Dirty Harry's" "Well do you [feel lucky], punk?" names a few war movies he doesn't like -- and a few others that are his all-time favorites.

In this edited transcript, Milius reveals why he's a big fan of "The Hurt Locker," which has garnered nine Oscar nominations, including best picture and best director.

CNN: Would you like to compare "Apocalypse Now" and "The Hurt Locker?"

Video: From the Pentagon to Hollywood

John Milius: Well no, they're very different. But one of the things that I think is comparable is that they don't really make any commentary on the war itself. There's no political commentary.

You go back to "All Quiet on the Western Front" -- we must have our guilt about war because we all share that -- we certainly share a guilt about war.

"The Hurt Locker" looks at the whole condition of war and endeavor and -- like they say -- war is human abrasion. It's like the rest of life -- with the heat turned up. It's this whole thing of the exhilaration of endeavor of life and risk. It's an animal attraction.

I think it's very interesting that they've made a bunch of movies about Iraq and all of them basically have been anti-American movies and they've made no money and they've garnered no attention of any kind.

And this movie is not anti-American, it's just what it is.

It doesn't take the presumption that we all want to see something to run down our country.

We're at war. I feel my own way about it. I feel that people have the right to criticize the war. But to assume that we should all feel that way is an arrogant assumption.

This movie doesn't shove into people's faces the idea of how terrible the war is, how horrible we're for being there how we're raping children every day, how we're doing all this kind of stuff.

Inside the heads of 'Hurt Locker' Bomb defusers

CNN: What are your top war movies of all time?

Milius: The best war movie of all time is "Battleground." It's about the Battle of the Bulge, made by William Wellman, 1949, it's just unparalleled in its authenticity, in its artistry, the vision of the human spirit. It's just superb.

What's really great about it is everything is played down. It's about all the aspects of war. They're muted the way they really would be in war.

CNN: What does it share with "The Hurt Locker?"

Milius: The intensity. It's about camaraderie, it's about the horrors and all of it being secondary to the overall experience.

What I liked about what [director Kathryn Bigelow] did was she shot it very clean. She didn't let her technique get in the way. She told a story.

CNN: Does "The Hurt Locker" have any shortcomings?

Milius: The only question I questioned when I first saw it was the sniper sequence. How did they suddenly become so good at being snipers?

These are EOD [explosive ordinance disposal] men. Snipers take a tremendous amount of training. Apparently they are cross-trained in sniping, I don't know -- somebody has told me that. But I think it's OK.

CNN: What are some war movies you don't like?

Milius: "Black Hawk Down" is garbage. The book was superb. In the movie, you don't know who anyone is, you can't tell who anyone is.

It's all so cool because it's [director] Ridley Scott, who has to be so much cooler than the rest of us, who's so detached and he has to show his vision is more important than telling you where they are, where the machine gun is ...

I'm not a great fan of "The Deer Hunter." It's interesting but it has very little to do with Vietnam.

"Platoon" is a very good movie. But it's not my favorite.

"Platoon" is a very harrowing experience -- but it's not something you want to see again and again.

It's [director and Vietnam War veteran Oliver Stone's] war. It has incredible credibility because of that. But it's not everybody's war. It's something particular to him.

If you look at "Platoon," you tend to want to believe it.

Whereas in "Inglourious Basterds," it's truly a comic book. [Tarantino] does shoot it in his own way. It has its own rules. And it works, in a strange way. It's like [legendary Italian director] Sergio Leone.

Quentin has done a tremendous amount for loosening up the whole stodgy industry. Quentin's a genuine rogue out there.

CNN: Is a Tarantino-Milius collaboration in the works?

Milius: We collaborate. He told me that I influenced the first scene in ["Inglourious Basterds"]. He told me, "I wrote that stuff when I was talking to you on the phone." I said, "Did I write a scene in that movie?" He said, "yeah." He didn't note it though. He forgot.

CNN: Have you seen "Avatar," where a private army in the future tries to take over a planet?

Milius: No I haven't seen it. Sounds sort of like Blackwater. I just hope Blackwater survives into the 22nd century, or whatever -- [laughs] I'd probably be on the side of the Blackwater people.

Remember in "Talladega Nights" when the French driver character asks, "Do you know why I came to America?" and Will Farrell's character says, "Health care systems, giant water parks. The same reason anyone comes to America."

This started with "Star Wars." I don't consider "Star Wars" a movie. It's a good water slide. It's great to be a water slide movie. Maybe they should have a different category: amusement park movies or best ride. Not best picture, best ride, most money made.

CNN: Did you attend the Oscars when you were nominated for 1979's "Apocalypse Now?"

Milius: I don't take the Academy Awards terribly seriously. Every year there's Academy Awards and it's very important to people in Hollywood because it's the senior prom.

They put me on the edge of the [stage] like I was going to win. But the minute I was there, I knew I wasn't going to win. I could just tell the mood of the Academy.

And they gave all the Oscars to another movie that was really an undistinguished movie -- a joke, as a matter of fact. We were beaten by a TV movie. This was "Kramer vs. Kramer."

People lately have said to me in interviews, "How do you feel about not winning an Oscar?" And I said I never gave it any thought. I long ago did not think about winning Oscars. I have a different philosophy of life.

The opinions expressed in this commentary are solely those of John Milius.