By Victor Zhikai Gao, For CNN 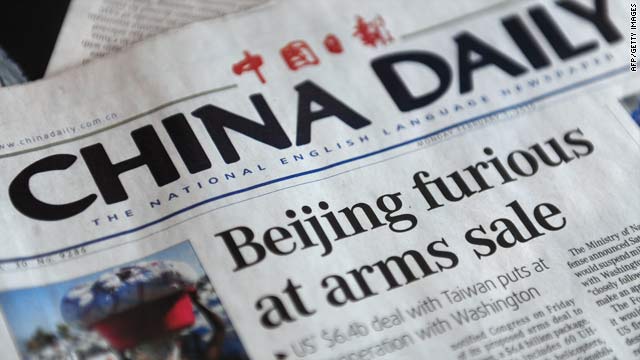 Editor's note: Victor Zhikai Gao currently practices private equity consulting and serves as a director of the China National Association of International Studies. He was a former employee of China's Ministry of Foreign Affairs and served as interpreter for senior Chinese officials.

(CNN) -- One year into U.S. President Barack Obama's term, China-U.S. relations have not taken off as many people originally wished for but have experienced a mixed record and given out mixed signals.

The recent U.S. arms sales to Taiwan have further darkened the prospects of the China-U.S. relations in the months ahead. For its part, China has taken unprecedented measures of calling off military consultations and cooperation with the United States and imposing sanctions on those U.S. firms involved in the arms sales to Taiwan.

Traditionally, China was more often than not on the receiving side of sanctions imposed by the United States and other Western powers and rarely uses sanctions as a foreign policy instrument. This helps to show the intensity of indignation, unhappiness and condemnation on the Chinese side at such U.S. actions.

Every reasonable person in the world would know that the China-U.S. relations are much greater than the Taiwan issue itself. But few can really figure out why the ever-important China-U.S. relations, which have been called the most important pair of bilateral relations in the 21st century, should be held hostage by the U.S. arms sales to Taiwan. After all, the United States and China are by now the two largest economies in the world and have a high level of economic and financial interdependence upon each other. China is the largest creditor to the United States, and the United States remains the most important export market for China.

Sharing many similarities, China and the United States are the two largest oil importers, two largest oil consumers and two largest greenhouse gas emitters in the world. They are both great continental powers with extensive overseas trade and economic interests.

However, while the United States is facing multiple challenges of war and peace in the world, China enjoys good relations with the rest of the world and domestic stability and robust economic growth. It is becoming increasingly obvious that the United States, despite its status as the only remaining superpower in the world, is no longer capable of handling many urgent challenges by itself and would increasingly need help and assistance from other countries. Given China's increasing resources, high sense of responsibility, and tradition of honoring its commitments, it is generally expected that China's helping hand will be more and more sought after in many urgent issues in the world, ranging from climate change, disaster relief, anti-terrorism, maritime shipping security, epidemics, global financial reform, and war and peace and development in the world in general.

Therefore, it is crucially important for China and the United States to better understand each other and to provide incentives to each other, so that they can increase cooperation for the benefit of the overall peace and stability in the world. In recent years, the United States has made many attempts to get China involved in Afghanistan and other situations of dire consequences to the United States. It doesn't require rocket science to figure out that when you ask for help, and significant and tremendous help on top of it, you need to demonstrate sincerity and genuine willingness of working together and seeking a win-win situation. China-U.S. cooperation across a whole range of issues in the world requires incentives and commitments from each other and nurturing and caring by both sides to work.

By inserting itself between the two sides of the Taiwan Strait and selling weapons to Taiwan when Taiwan and the Chinese mainland are discussing the drafts of the peace treaty between them, whatever benefits the United States gets from such arms sales to Taiwan, if any, will be dramatically overwhelmed by the disincentives and suspicion it creates for China as far as its cooperation with the United States is concerned.

If the United States believes that Taiwan is just Taiwan and the United States can do whatever it wants without disincentivizing China in its overall relations with the United States, then such beliefs are completely off the mark, and acts based on such beliefs will have dire consequences. In addition to the harsh responses China has already announced, if China decides to buy less or even stop buying the U.S. treasury bonds, even for just a short couple of months, the United States will find it much more difficult and costly to borrow money abroad to finance its astronomical expenditures.

As for China-U.S. relations, greater cooperation rather than friction or even confrontation between these two largest economies in the world will be beneficial not only to themselves, but to world peace and stability as a whole. Let's promote greater China-U.S. cooperation with incentives. Let's avoid damaging China-U.S. cooperation with disincentives. Let's hope that President Obama will bring coherence and consistency to the China policy of the United States, and that China and the United States will promote their cooperation to a higher level as required by world peace and development.

China and the United States should refuse to be held hostage by the Taiwan issue and should do whatever they can to incentivize greater cooperation between them for the benefit of world peace and development. On the other hand, again it doesn't require rocket science to know that it takes two to tango.