For job seekers, top five cities for the next decade 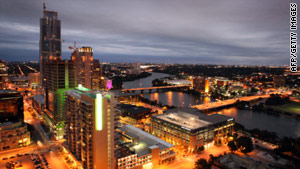 Austin, Texas, is ranked as the No. 1 city for jobs for the next decade, according a Kiplinger list released Tuesday.
STORY HIGHLIGHTS
RELATED TOPICS

With America's economy still shaky, Kiplinger's Personal Finance Magazine released the best cities for the next decade on Tuesday. These cities, which offer promising job prospects, were selected based on population growth, unemployment rate, income growth and cost of living. And, the winner is?

That's a ranking Bijoy Goswami of Austin is excited the city has earned. Attracted by the city's booming technology sector, Goswami moved to Austin in 1995 after college. Since then, his career has flourished, he says, thanks to the city's supportive business climate. At 37, he's managed to run a start-up, write a book and produce a short film.

"Because entrepreneurship is the ethos of Austin, it's part of what makes it so special here," Goswami said.

In the past decade, Austin has attracted major companies such as Facebook, Apple and Samsung, but the city is also an incubator for small businesses. While the recession hit many cities hard, Austin's economy and housing market was relatively untouched, according to a spokesperson from the Austin Chamber of Commerce.

Here are the top five cities for the next decade, according to Kiplinger. More rankings are available from Kiplinger's Personal Finance Magazine.

1. Austin, Texas: Come to Austin with an idea and you could make it big in a city that fosters entrepreneurship and is a magnet for small business start-ups. Dell and Whole Foods Market are two examples of giant companies that started in the Austin area and exploded nationwide. The city also boasts great live music and pristine lakes and parks.

3. Seattle, Washington: If the lush greenery isn't enough to make you move to the Seattle area, then innovative companies such as Amazon, Microsoft and Boeing are also a career draw. Seattle "crackles with creative energy," Kiplinger reports. The University of Washington also offers a range of research opportunities in the areas of medicine and bioscience.

4. Boulder, Colorado: Kiplinger calls Boulder "an intellectual hot spot where environmental and scientific ideas blossom into businesses." The city has more than 6,600 small businesses and corporations, Kiplinger reports. The University of Colorado and federal research laboratories also provide jobs. Another perk: If you have an active lifestyle, there are ample ski slopes and hiking trails to keep you busy.