11 signs your interview is in trouble 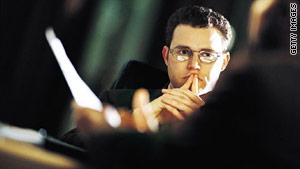 If the person interviewing you seems to be simply reading off a list of questions, it could be a bad sign.
STORY HIGHLIGHTS

Sometimes you don't even need the signs to know what to expect. If you see a flurry of red brake lights, you know traffic is not moving. In an ice storm, if the car in front of you is skidding from side to side, you can bet that the road is slippery.

Job hunts come with their own warning signs, but they're not typically as blunt as the bright yellow and orange signs posted on the side of the road. Instead, you're more likely to get context clues, like the brake lights.

The interview process is full of uncertainty for a job seeker, and much of the power is in the interviewer's hands. Sometimes you don't know if the interview is going well. Other times you're so nervous you don't recognize the signs that this company isn't right for you.

1. You're pretty sure you know how to get to the interview site

Before you can even look for warning signs of a bad interview, you need to get there first. Lisa Fedrizzi-Hutchins is a human resources/compliance administrator who was heading to a job interview earlier this year. She trusted her GPS unit, but realized the directions were incorrect once she was en route. Fortunately she called the company and asked some clarifying questions so that she could arrive at the interview on time.

2. You're talking more than the interviewer is

"Because many job seekers are anxious to show that they are the best candidate for a job, they often dominate the conversation with things like never-ending answers or run-on sentences," he explains. "The interview time may end before they've had adequate time to deal with all the questions the interviewer had prepared."

3. Interviewer's eyes are on the clock, not you

As a managing partner at Winter, Wyman and Co., Mark Gleckman knows the importance of an interviewer's body language.

"During an interview, be an active observer," Gleckman advises. "Watch your interviewer's body language -- is she glancing at her watch or noticing who is walking by? These could be signs that the interview may not progress to the next phase." He suggests asking the interviewer if you've provided all of the information she was hoping for or if you can offer anything else to get the most out of the interview.

An interviewer should treat you with the same respect he or she expects. Jennifer Mounce, executive coach and interview adviser for Coach Effect, has heard her share of bad interview stories.

One manager stopped an interview to take a 20-minute phone call without warning the interviewee, who was told to stay in the room until it was over. When the call was over, the interviewer resumed with the questions, but his mind was obviously elsewhere.

"Candidates must ask themselves if they want to work for a person who can't give them their full attention for a short period of time or who doesn't have the communication and/or social skills necessary to put the candidate at ease, apologize or explain the necessity of the disruption," Mounce says.

Mounce also warns of employers who hold marathon interviews that last seven hours. Applicants are not asked if they'd like a restroom break, snack or glass of water. Mounce advises you to think about what the job would be like if the interview is this bad.

6. No one wants to work here

An insightful question that many job seekers fail to ask is why the position is available. Or, to frame it so that you sound focused on your future with the company, ask where the employee formerly in the position is today. JR Rodrigues, co-founder of JRBM Software, cautions job seekers to watch for companies with a revolving door.

"[If] the hiring manager complains to the interviewee about having had his last three hires quit after only a short term of employment, you should wonder about what is causing such turnover and whether this job is for you," he says.

7. You're participating in a questionnaire, not an interview

Kris Alban, director of strategic partnerships for iGrad, keeps a list of questions in front of him when conducting an interview.

"During a good interview, I will go off-page as certain responses provoke additional questions or I may ask the interviewee to expand on something they said," Alban says. "If you notice your interviewer just running down their list of questions, then you know that you need to engage them more. I definitely become more engaged when the interviewee accompanies their answer with a story that anchors it."

8. You get snippy with the administrative assistant

The interview begins the moment you are on the premises, so don't save your best behavior for the meeting room. Monique A. Honaman, CEO of ISHR Group and a former HR manager, stresses the importance of good manners.

"I can't tell you how many times I have heard of job seekers being dismissive to certain individuals, and I know hiring managers often ask the receptionist to provide input on the candidates as well as those more heavily involved in the job interview process," Honaman says. "It's not just about having the skills and abilities to do the job; the personality and respect elements are critical, too."

9. You spend 10 minutes complaining about your last boss

Honaman also cautions against going negative during an interview. "Job seekers must never talk negatively about a former co-worker or former boss, even if it seems like this negativity is being encouraged," she warns. "Take the high road. It's an incredibly small world out there and it's amazing who knows who."

10. The company is in financial trouble

"[If] there is a loud argument in the office of the company you are interviewing at stemming from a creditor who has not received payment for his product or services that were purchased by the company, you need to consider whether this company will be able to pay you," Rodrigues says.

11. The employer doesn't keep his or her word

Rodrigues also warns against employers who tell you one thing but do otherwise. Blatant lies are obvious warning signs, but other subtle ones also hint at trouble. If you were given a timetable during the interview but you haven't heard anything since, Rodrigues says you might have fallen off of the interviewer's radar and need to work your way back into his or her view.