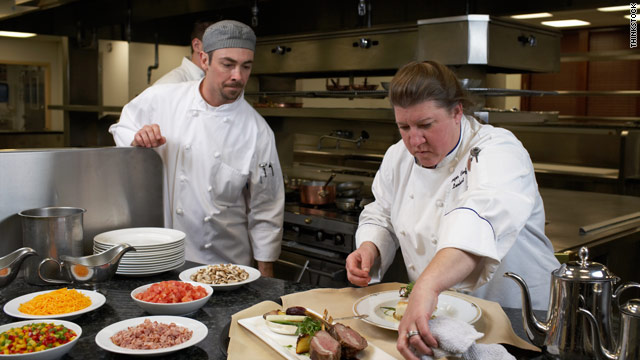 (Careerbuilder.com) -- Author BJ Gallagher, who has been a boss and worked for male and female bosses, has a list of tips she's titled, "How to Tell a Male Boss From a Female Boss."

-- He knows how to follow through; she doesn't know when to quit.

-- He loses his temper occasionally; she can't control her emotions.

-- He isn't afraid to say what he thinks; she's mouthy.

-- He controls his emotions; she's cold.

-- He thinks before he acts; she can't make up her mind.

-- He thinks before he speaks; she second-guesses herself.

The list might read like an e-mail forward that people laugh at, but considering the average American woman earns approximately 21 percent less than the average man, is there any truth to these perceptions?

"I can tell you that the exact same behavior is judged differently, depending on whether it's a male or a female doing the behavior. This is true at all levels in the organization," says Gallagher, author of "Everything I Need to Know I Learned From Other Women."

It's all about perceptions

Vicky Oliver, author of "Bad Bosses, Crazy Coworkers and Other Office Idiots," says she sees the differences in how people perceive professional men and women. Oliver says leaders of both genders can show aggression and still be accepted by their employees. The problem arises for midlevel professionals.

"Yelling, berating underlings, slamming doors, throwing chairs and loud, truculent phone conversations with vendors on speakerphone that everyone can hear can sometimes be career-stallers," Oliver explains.

"If a woman acts out, underlings will gossip about her, and eventually their whispers will be overheard by someone in top management. If a man in the middle behaves in the same way, sometimes underlings will strive to ally with him. They may perceive that he is powerful or protected. His behavior is still errant, but it's less likely to get him in trouble because he'll have more allies to defend him if push comes to shove."

Obviously, abrasive behavior isn't the entire problem. How people react to it is also an issue, and it carries over into other types of workplace behavior.

"Crying is the worst emotion to show at the office, and unfortunately, this is generally a female response," Oliver says. "Crying makes everyone around you feel like you're weak and out of control, and it will positively unnerve some men in the office who won't know how to react. Crying seems to be mildly acceptable in certain circumstances (such as when a female employee is laid off); it's never acceptable as a response to a disagreement or office showdown."

Naturally, if people didn't let tears unnerve them, becoming emotional wouldn't be a problem. But the fact that we use "emotional" to describe tears -- but not screaming -- alludes to the problem, considering that they're both effects of an emotion.

Beware of the 'crazy' woman

Clinical social worker Irina Firstein has been a therapist for more than 20 years and has seen the problem firsthand.

In Firstein's opinion, the problem doesn't come only from men. She says women are more tolerant of a man's unfavorable behavior than a woman's. As a result, a strong woman is seen as competition by male and female colleagues alike, putting her in a tougher spot than her male counterparts.

Oliver suggests you try to understand the behavior. You don't have to like it, but you might be able to handle it with less bias.

"I feel that sometimes people react at the office in a similar way as they've been conditioned to in their personal lives," she says. Fits of rage could be the result of upbringing or a current household, not necessarily your performance.

"If you happen to be on the receiving end of [someone's] outbursts, it's helpful to remind yourself that most over-the-top reactions are not about business ... it is personal, and it's about something in that person's life that has nothing whatsoever to do with you. The person is just venting steam."

Does that mean you have to accept what's happening? No. Learning how to deal with an angry boss is one thing; learning how to stand up for yourself is another.

Know when to speak up

If you're a woman, you could find yourself in this situation more often than you'd like. Author Judy Hoffman still remembers a specific instance when she let intimidation get the best of her.

"I was the only woman on the executive team of our small chemical manufacturing company. At meetings, whenever I would voice my opinion, one male chauvinist -- the vice president of manufacturing -- would sit with his head in his hands, elbows on the table, looking down at the floor," Hoffman says. "It was very clear what he was saying: 'Why in the world would this woman be allowed to sit at the same table with us men, daring to give advice to the president of the company?'"

Hoffman hadn't received that kind of hostility while at the company for 16 years prior to his arrival, and she didn't confront him on the issue.

"To this day, I'm embarrassed that I did not deal with it better as I let it fluster me," she recalls. "But it didn't make me stop speaking up when called for."

Even if Hoffman didn't address the VP, she didn't let him alter her behavior because she knew the problem was his and not hers. When you think about it, if an outspoken woman is going to be called mouthy and a quiet one will be labeled a pushover, what do you have to lose by being strong-willed?