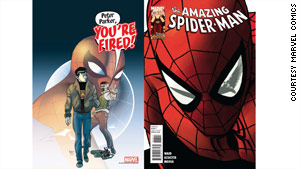 Not even his spider-senses could help Peter Parker escape a pink slip at the mayor's office.
STORY HIGHLIGHTS
RELATED TOPICS

New York (CNN) -- Spider-Man's alter ego cannot escape the harsh realities of the current economic times and will lose his job in an issue of the Amazing Spider-Man hitting stores this week.

Peter Parker, official photographer of the mayor by day and New York City crime fighter by night, is going to face new challenges, including unemployment.

"He's going to struggle with unemployment and trying to save the city while he can barely afford to keep a roof over his head," said Steve Wacker, Marvel Comics senior editor.

Parker has always been a grounded character with real-world problems, Wacker said. His aunt is frequently sick, he has girlfriend troubles, and he sometimes struggles to find work. In addition, Spider-Man story lines are often set against a backdrop of current events.

In the near future, Parker will have to juggle paying bills and buying "web-fluid" and other materials to fix his superhero costume in addition to keeping his dual identities under wraps.

Parker's work history includes photographer, assistant high school coach, science teacher and scientific researcher, according to his biography on the Marvel Web site. His education includes a college degree in biophysics and some postgraduate work in biochemistry.

It was at a science exhibit he attended as a teenager that he was bitten by a radioactive spider and acquired the creature's strength, agility and weaving ability, says Marvel Comics.

And although Parker has skills few other others can claim, he probably won't list these on his resume: superhuman strength, ability to cling to most surfaces, fast traveling ability aided by web-slinging and spider-sense danger avoidance system.

The Amazing Spider-Man comic was first published in 1963.