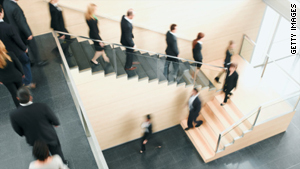 A lot of people are trying to get hired for fewer jobs.
STORY HIGHLIGHTS
RELATED TOPICS

(CareerBuilder.com) -- Desperation isn't an attractive trait on most people ... maybe anyone.

If you've ever witnessed desperation in a relationship, you know how unappealing it can be to see someone willing to settle for something. Anything. It makes you wonder just how much that person values himself or herself.

A job search isn't the same as a quest for true love, but it can often result in desperation. Think about it: If you don't have a job, you don't have money to pay the bills. For many people, a job search is linked to survival. Who wouldn't get desperate after a while?

Just like in a romance, however, being too eager and needy can backfire. Even if you're feeling as though you'll take any job that comes your way, don't let employers know that. You might be desperate for a job, but you don't have to act like you are.

Why desperation doesn't help you

You might think, "Won't I impress my future boss if I prove I'm willing to do anything to get the job?" You would be wrong. To help you understand what hiring managers think when they come across desperate interviewees, we went straight to the source.

Tony Deblauwe is the founder of HR4 Change and has 15 years of human resources experience. In his career he has seen more desperate job seekers than most people. Sometimes things go so wrong they're almost criminal.

"I had a case once where after not hearing from the recruiter (from just a résumé submission), the candidate came to the office and waited in the parking lot for the CEO," Deblauwe remembers.

"It was easy since the CEO's picture was online. [The candidate] felt that HR and staffing were a roadblock and the best way to prove his 'inventiveness' was to approach the CEO directly. It turned out badly as you might imagine -- we had to get security involved."

Not all candidates are as extreme. In fact, desperation is so common, Deblauwe sees certain traits appear time after time.

"People who have been searching a long time or who have limited leads respond to job posts that they will take any job even if it's clearly a step down," he says. "Sometimes this is due to the economy; sometimes they want to get into a company at whatever the cost. I have personally known of candidates doing this to get into Apple or Google."

"Sometimes [starting as a temp] works, but when a candidate offers it first against a full time posted job, it's a turnoff," Deblauwe cautions. "Rather than show confidence that you can do the job as presented, you offset the discussion by saying you will be a temp. Not a good move and very desperate."

"It's one thing to say your salary is negotiable, but making a point in the phone screen or first round interview about not caring about the pay not only reflects bad judgment but low self-esteem," Deblauwe warns. "I ask myself, 'What else will you cave on if you had this job?'"

According to Deblauwe, being pushy is one of the most classic signs of a desperate job seeker.

"After sending in a résumé or getting an initial call back, a candidate loses all sense of how staffing process timing works," he says. "They will e-mail [or call] after one or two days. Candidates forget that many back-end processes slow job updates -- not because people forgot about you or don't care. This behavior doesn't show you are determined and eager; rather it makes you appear annoying and distracting. Almost always people who do this, even if they appeared to be a great fit in the beginning, get eliminated."

What you can do

First off, don't say any of the above phrases. More importantly, prove that the company would be lucky to have you, and not vice versa. Don't be cocky, but act like you're ready for the job because it's the right fit, not because it's available now.

Even if you are desperate for a job, remember these tips because they're important to every job search.

• Have proof of your accomplishments so you can show the hiring manager that you deliver results.

• Show interest in the company. Employers like to know that you care about more than dollar signs, so do a little research on the company and even the interviewers if possible.

• Practice your interview answers so you don't blurt out a bad answer. For example, your answer to "Why do you want this job?" shouldn't include the low balance of your checking account.

• Make a list of the reasons you are the best candidate for the job. You can't convince a hiring manager that you're the best choice for the position if you don't believe it yourself. The best way to convince yourself is to look at all your best qualities.