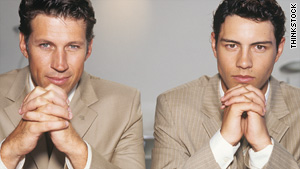 Mimicking someone can help you get ahead in certain business situations.
STORY HIGHLIGHTS

(OPRAH.com) -- Although we're typically unaware of the mirroring we do with loved ones, researchers now say that intentionally mimicking the person you're engaging with can be a useful social tool (as long as it's not overdone).

Here's when you can use mimicry to your advantage, and when it can backfire:

On a date: Mirroring your date can make you seem more attractive, according to a 2009 study by Nicolas Guéguen, a professor at the University of South Brittany in France. In this context, echoing gestures -- say, crossing your legs or touching your face -- may be less likely to be detected than mimicking words.

During business negotiations: A Northwestern University study found that negotiators who copied their counterparts' gestures and mannerisms (such as running their fingers through their hair or leaning back in their chair) were able to secure a better deal.

Oprah.com: 5 ways to make a good impression on anyone

In a sales or service position: "Mimicking others can make them feel more rapport with you," says Robin Tanner, Ph.D., assistant professor of marketing at the University of Wisconsin. In a recent study, Guéguen found that salespeople who mirrored the expressions, sentences, and body movements of their customers sold more products and rated higher on customer-satisfaction surveys than those who didn't.

Oprah.com: How to get out of a career rut

When you're the boss: If you don't want a subordinate to think of you as a friend, don't mimic his gestures.

"Bosses need to maintain their status in order to enforce productivity," says Amy Dalton, Ph.D., an assistant professor of marketing at Hong Kong University of Science and Technology. In one of Dalton's studies, subjects who were assigned to be the follower on a task performed poorly when their postures and mannerisms were subtly mirrored by the leader.

Oprah.com: What's it really like to work for YOU?

When you're interacting with someone you don't get along with: If a person dislikes you, mimicking will come off as sycophantic. "Mimicry is a social glue for most interactions, but it doesn't mend broken relationships," says Marina Kouzakova, Ph.D., a researcher at Leiden University in the Netherlands.

Oprah.com: Why the way we work isn't working