By Larry Frum, Special to CNN, and Topher Kohan, CNN 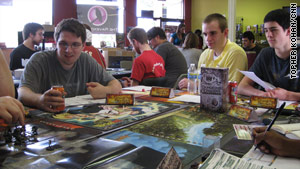 Players take part in Dungeons & Dragons Encounters, a version of the game for people with busy schedules.

The party peers into the darkness as the ranger charges toward our unseen foe. Suddenly, creatures of bone and rotting flesh rush towards us -- catching nearly all unaware while in the distance, a skeletal figure bursts into flames and advances towards the group.

Yes. We are playing Dungeons & Dragons -- but it's a different version that the makers hope will lure back old players and bring in new ones.

First published in 1974, Dungeons & Dragons is described on the covers of the original rule books as a "Fantastic medieval war games campaigns playable with paper and pencil and miniature figures."

In reality, it is a way for gamers to spend hours and days with friends in a role-playing game that, more often than not, encompasses a lot of time in preparation and play.

Many of those early gamers were younger with plenty of spare time to devote to building and exploring fantasy worlds populated by goblins, elves and the occasional dragon. Even as the game evolved into Advanced Dungeons & Dragons, the fan base changed as players grew older and were replaced by younger players eager to go adventuring.

Wizards of the Coast, the current publishers of D&D, recognized that some of the 24 million people who used to play the game left, not because they didn't want to play, but because their lifestyles changed and they didn't have the time anymore -- so they have created a new rules system to address those concerns and bring back their former fans.

The new "D&D Encounters" provides all the materials needed to run a D&D game, but in a relatively short period of time. The goal, said brand director Liz Schuh, is to get those former gamers rolling the dice again.

"We wanted to try and create experiences to fit in their current time frames," Schuh said. "It is also an opportunity to learn the new rules system."

"Encounters" has premade characters and a premade adventure provided to the game's referee and storyteller, the Dungeon Master. Maps, tokens, game pieces and player aids, such as bonus cards, are all included.

The adventure is spread out over 12 weeks, but it only takes about two hours to play each week's encounter. Mark Watkins, a Dungeon Master for the "Encounters" game at Ravens Nest store in Marietta, Georgia, said the new version is simple and timely.

"It is very easy to DM. They give you everything," Watkins said. "This is really good for people to drop in and play."

Part of the appeal for "Encounters" was to give the busy gamer the chance to play D&D once a week as their schedules allow. In the past, D&D games could take months, even years, and players generally had to attend every session so that the story flow wasn't interrupted. With "Encounters," players can come and go as they choose and new players can easily be integrated into the story continuity.

During the 11th session in the first "season," called "Under Mountain," at the Ravens Nest game two weeks ago, there were two players who had been there since the first session, two that came in during the middle sessions, and three that were there for the first time. The game is structured so that anyone can join up with little or no preparation -- just a willingness to roll dice and have fun.

Wizards of the Coast wants to remind players that using an active imagination can be very satisfying compared to simply being fed information from a computer screen. "Encounters" showcases the best part of a paper-and-pencil role-playing game: interactions with others and imagining a rich, wonderful world in your mind that you can escape into for even a short time.

They hope it is nostalgic fun for a bunch of old-time gamers wanting to relive the thrilling but time-intensive games they used to play.

"We realize that our older players probably don't live near their old group and have a hard time finding a D&D game," Arron Goolsbey, director of Wizards of the Coast's Organized Play Programs said. "We want to connect gamers together in a way that fits their lifestyle and time challenges these days."

It seems to be working. At a recent "Encounters" game at Tower Games store in Lawrenceville, Georgia, the party was made up of three guys who had played in their youth and were intrigued about getting back into the game in a way that didn't interfere with family or work. Store owner Andrew Phillips said the response has been overwhelming.

"There are a lot of people wanting to play," Phillips said. "We even have some father/son and father/daughter players who are coming in."

The DM, who goes by "Augie," has a son, Alex, who plays "Encounters" and a father and son team that also plays in his game. He said it is good to see the kids learning the game and the new program makes it easy.

"The new version (Fourth Edition Rules) is about teamwork," explained Augie, who said he has been playing D&D since 1979. "I can whip up an Encounter in no time and players can be playing in about five minutes. In some ways, it plays out like a board game."

The new rules make the game faster and easier to run, said Schuh. She said it is also very flexible, so that players can use the premade characters or make up one of their own.

"We wanted to give them enough of a sandbox to play in," she said. "DMs and players can do whatever they want."

At a recent "Encounter" session, Watkins explained the new powers and effects to new players offered tips on game strategy.

"Combat is more fun and more dynamic," Watkins said as he directed a flaming skeleton to throw fireballs at the party. The excitement and gasps around the table is proof that players are quickly getting emotionally involved in the game.

And they're just getting started.

While they didn't have hard numbers, Schuh and Goolsbey said they have had reports of tens of thousands of gamers around the world participating in "Encounters." And Wizards has made it easy to find a game near you.

Their website provides store locacations running the program, a character generator if you want to create your own, reviews of previous encounters so you can catch up on the story and even gaming podcasts from webcomic giant Penny Arcade and the writers of the Cartoon Network show "Robot Chicken."

In an attempt to appeal to tech-savvy players, the game manufacturer offers bonuses via its Twitter account and an online subscription service to offer information on adventure building, character upgrades and more.

With a new season beginning on June 9 -- the "Dark Sun" adventures -- they have two words for anyone who is interested in D&D -- just go.

"You'll be handed a character and you'll get help," Schuh said. "There is a palpable, emotional response to playing the game with friends. Even new friends."