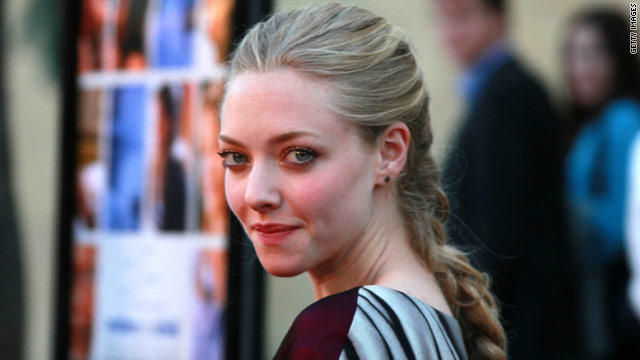 "I clearly like being fit, but it's not thin without a hell of a lot of work," Amanda Seyfried said.
STORY HIGHLIGHTS
RELATED TOPICS

(The Frisky) -- Actress Amanda Seyfried has been pretty candid about her disdain for dieting. She recently spoke up on The Huffington Post site about how unfortunate it is that near starvation is often necessary for success in Hollywood:

"I clearly like being fit, but it's not thin without a hell of a lot of work -- I run and I exercise a lot and then I eat...I'm not going to deny that I don't think about it every day, it's always on my mind. I have to stay in shape because I'm an actress.

"It's twisted, but I wouldn't get the roles otherwise. If I'd been bigger, I don't think they would have cast me for 'Mamma Mia'! If I have to diet, it's salad with protein, salmon and broccoli, no dessert. But what kind of life is that?"

Yeah, what kind of life is that? I'm eating dessert for breakfast right now and feel pretty OK about it, but for people whose chosen profession is acting, it's a big issue.

Here are a few celebs who have whined about this unfair standard of beauty.

Sandra Bullock says she is paid to be thin

Sandra Bullock once said, "People ask, 'How do actresses do it?' Um, they pay us to do this in order to look good on film," Bullock confessed to InStyle.

Beyonce was "dying" to be thin

When Beyonce had to drop 20 pounds for "Dreamgirls," she did a Master Cleanse, and said this about it in FHM magazine: "I lived on water, cayenne pepper and maple syrup for 14 days. It was tough; everyone was eating and I was dying.

"After that I ate waffles, fried chicken, cheeseburgers, french fries, everything I could find. That was the best time of my life. I've gained twelve pounds."

Former "Baywatch" and "Celebrity Fit Club" actress Nicole Eggert fought back against tabloid criticism over her weight gain, telling ThatsFit.com, "to maintain this Hollywood figure is really, really unrealistic. Is your heart healthy? Is your mind healthy? Do you feel good? That's it. Period. This skinny-minnie-waify look that has taken over is unrealistic."

But, just in case, she lost all that weight and is pimping that QuickTrim stuff Kim Kardashian is so fond of.

Demi Moore also had her share of body issues and hopes she hasn't passed them on to her daughters.

She told Vanity Fair, "When I was living that idea that if I was thinner I would be better and more accepted and more attractive, I stopped looking at it as being thin or skinny... I have three daughters with three very different types of bodies... I just try to encourage them to find the beauty in who they are and what they have, as opposed to focusing on what they're not. I want them to know that being thin does not equate to happiness."

Jennifer Aniston's lost it for "Friends"

When she started her career, Jennifer Aniston was told that she needed to lose 20 pounds to be on "Friends."

Men aren't immune to the weight game. Ricky Gervais recently spoke out in response to suggestions that he lost weight to "kick start his film career."

Gervais said to The Telegraph: "The Hollywood pressure is that you do have to be of a certain standard or a certain type. I see everyone doing it, even good character actors. I think, 'Why are you starving yourself?' I remember when a newspaper said, 'He's lost three stone for Hollywood.'

"I went, 'No, I haven't lost three stone and I would never do it for Hollywood. I did it 'cos I work out and I wanna be fit.' And that annoys me."

Kelly Osbourne: Being fat was worse than drugs

Kelly Osbourne made a really good point when she told Us Weekly, "I took more hell for being fat than I did for being an absolute raging drug addict. I will never understand that. Now I've actually read in some magazines that I'm too skinny. You can never ever ever win." Why is it so much worse to be fat than risking your life daily with drugs?

Jessica Simpson beaten up over 10 pounds

After the mom jeans debacle, Jessica Simpson shared her feelings on weight with Oprah Winfrey: "The fact I was famous last year for gaining 10 pounds is ridiculous and really sad... Just the pressure that women feel to be thin... The pressure that the media puts on women is so unfair, and so disgusting."