How family should treat your ex? 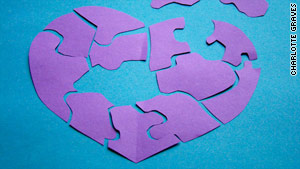 After a relationship crumbles, should your ex stop all contact with your personal network?
STORY HIGHLIGHTS

(The Frisky) -- When you break up with someone, how do you expect the people in your life to treat your ex?

On a recent Sunday, I read the "Modern Love" column in The New York Times which explored that topic in an essay by Charles Antin. Antin had an amicable, cold-turkey breakup with his girlfriend of five years, and then found himself morosely following her life in the aftermath via Facebook.

When his "technophile" grandfather joined the social networking site and befriended his ex -- because of their shared love of Frangelico, it seems -- Antin was angry. The column ends with a bit of a whimper -- Antin confronted his grandfather, who ended up quitting Facebook entirely -- but it got me thinking about how we expect our family members and friends to treat our exes, and how we expect their family and friends to treat us, whether the breakup was amicable or not.

When my ex and I broke up, I didn't have much to worry about on this front. While I was friendly with his friends and he was friendly with mine, we didn't really have mutual friends, so it wasn't like anyone was in a position of "choosing sides."

My family had never been close with him because we hadn't spent too much time with them as a couple, so they had no interest in keeping in touch with him. And really, given the way things went down, everyone in my life kind of hated his guts.

A few of my friends were Facebook friends with him before we broke up, and when we split, most of them asked if they should defriend him or not. I said, "No," because obviously someone needed to be keeping tabs on his relationship status changes, as well as post and tag photos of me looking happy for him to see.

So I've never been in the position of having to really "think" about how I wanted my friends to treat my ex. They've been doing it right since the second we broke up.

However, one of my primary concerns when we broke up was how it was going to affect my relationship with his mom. Even though I hadn't "done" anything, would she still feel comfortable maintaining contact with me?

And even if she did want to remain a part of my life in the months after the breakup, what about when my ex brought home a new girlfriend for her to meet? Would her friendship with me get in the way of her developing a bond with a new, potential daughter-in-law? And what did he think of his mom still keeping in touch with his ex -- the very same ex who has, well, given him a piece of her mind on this very site (all of which could have been read by his mom)?

The Frisky: Is fighting healthy in a relationship?

All of this was weighing heavily on me in advance of my 30th birthday. Though my almost-mother-in-law and I had vowed to keep in touch, I hadn't spoken with her since before I found out and wrote that my ex had likely cheated on me with his coworker (and lied about it) and had also lied about an incident early on in our relationship involving his ex-girlfriend.

Since the last time we spoke, I had written about all of these things, as well as sent my ex an extremely angry and accusatory email (which he didn't acknowledge), and I was worried a little that he had maybe bad-mouthed me to his parents -- i.e., told them I was crazy -- in an attempt to cover his butt, should they confront him about the things I wrote about (in the event that they still read The Frisky).

I hesitated to check in with them because I didn't know what kind of reception I would get. I was pretty confident his mom knew me well enough that she wouldn't believe any lies he might tell and, despite everything, I had a hard time really believing my ex could be that vindictive. Turns out, my instinct was right --his mom texted me on my birthday, as did his sister. It was a wonderful birthday present, knowing he hadn't tried to taint their view of me and that they still very much wanted to keep in touch.

The Frisky: When is the ideal time to get married?

I talked to his mom a few days after my birthday and we avoided the subject of my ex almost entirely, though she did say she had mentioned to him that she had wished me a happy birthday. She said he seemed a little weird about it, which I suppose is fair and normal.

I respect him for not getting angry or demanding that we cease contact, I respect his mom for, well, not really caring whether it bugs him, and I am doing my best to respect the relationship(s) in general, by not making him a topic of conversation when we do speak. Of course, if I actually did want to discuss my ex with his mom -- and aside from a burning curiosity about whether he has introduced his parents to the aforementioned coworker, I really don't -- that would be a sign that the friendship between us isn't the healthiest thing for me, as I take the final steps in moving on with my life.

So, as far as keeping up relationships with an ex's family and friends goes, proceed with caution.