Pets and people buried together 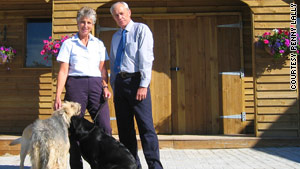 Penny Lally stands with her husband, John, who was later buried with several of their pets.

London, England (CNN) -- Like many people, widow Penny Lally plans to be buried alongside her family. But in her case, that includes a menagerie of family pets.

Her husband, John, who died of cancer three years ago at the age of 64, is already buried with their horse Super Sam, Blot the cat, Muppet the dog, and even Brian the bird.

"I often tell people that John has a canary singing in his ear, a cat purring at his feet, a dog at his side and a horse to ride on when he likes," Lally said. "I know some people might find this strange, but I loved my pets and wanted them all to be close to me and my husband and to each other."

Lally, 66, runs a pet crematorium and woodland burial place in Penwith, Cornwall, in southwestern England. She has buried more than 30 owners alongside their animals and has over 100 more plots reserved for pets and their owners, she said.

The idea of joint burials was first suggested to her by an elderly neighbor who died at the age of 77, a year before John's death, she said.

"Mrs. Winchcombe had seven cats and wanted to be buried with all of them when she died. It was certainly an unusual request," Lally said.

"We had to apply for permission to extend our license to burying humans as well as animals, but it was wonderful that we could carry out her last wishes."

Since then, Lally has seen an increasing number of pet owners in the UK seeking joint burials.

There are currently only half a dozen cemeteries in the UK that allow pets to be buried in the same plot as their owners, but in January, Lincolnshire council became the latest authority to grant planning permission for a joint site.

"I think there has been more interest recently because people are starting to realize it is possible," Lally said.

One of her customers is animal lover Carole Mundy, 54, who has reserved a plot for herself and her husband Robert next to their 17-year-old golden retriever, Dylan, who was buried at Penwith in 2008.

"I know it isn't conventional, but I'm so sick of people saying that 'it was just a dog or a cat,'" Mundy said. "Animals give us unconditional love and I absolutely adore my pets. If people want to call me kooky I don't care."

The UK regards itself as a nation of animal lovers, so perhaps it is not surprising that there has been an increase in joint burials, but the practice is also on the rise in the United States.

"There has been a lot of interest from the public, who are asking funeral homes if they can have their pets buried with them," said Robert Fells of the International Cemetery, Cremation and Funeral Association in Virginia.

"It's still a relatively new concept, so whether it's a fad or an emerging trend, I'm not sure, but it's definitely on the rise," he said.

"We are seeing an increase in public interest," said Roberta Knauf, director of Hillcrest-Flynn Funeral Home in Pennsylvania. "The joint burial concept started in 2006, when a few people were interested -- but last year we had close to 70 joint burials in our cemetery."

In fact, the practice of people being buried with pets isn't new. It dates far back into British history when Anglo-Saxon nobles were buried with their possessions, which included their horses.

Even further back, the pharaohs of ancient Egypt would be buried with their mummified cats, dogs and monkeys, which they believed shared an afterlife with humans.

But after centuries of affiliation with the pagan gods of Egypt and Rome, pet rituals found little tolerance in the new Christian era.

"The more Christianity became institutionalized, the more animal practices were discouraged as it was accepted that humans were the only beings with souls," said Mary Thurston, a Texas-based anthropologist who specializes in the shared history of people and pets.

The director of the UK's Association of Private Pet Cemeteries and Crematoria said people should be buried as they see fit.

"When you pass away, it's important to have your wishes granted and people deserve to be buried in the manner they choose if they are not hurting anyone," Kevin Spurgeon said.

"My horse was such a good friend and by my side through the ups and downs of life," pet cemetery owner Lally said. "Like me, many others see their pets as part of the family and want to be together with them even in death."