Daughter: Mom was a 'monster' 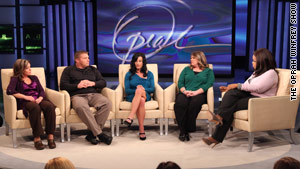 (OPRAH.com) -- In 2002, 14-year-old Elizabeth Smart was taken at knifepoint from her bedroom in one of the highest-profile kidnappings of all time. Elizabeth was rescued nine months later, after her sister recalled a memory from the night of the abduction. She'd allegedly been taken by a man who had done some repair work on the family's home, a self-proclaimed prophet named Brian David Mitchell.

Mitchell has pled not guilty, and a judge is determining whether he is competent to stand trial.

Mitchell's wife of 17 years, Wanda Barzee, was an accomplice in the abduction. On November 17, 2009, Barzee pled guilty in Federal Court to kidnapping and unlawful transportation of a minor. She's confined to a state hospital and has yet to be sentenced.

State charges are pending against both Mitchell and Barzee.

Rhonda, Andrea, Derrick and Louree are four of Barzee's six children. For the first time since their mother pled guilty, they are speaking out about their experiences growing up with her.

"I think the media portrayed my mother as being a victim of Brian David Mitchell, and I think one of the reasons I wanted to come on this show is to kind of expose her for the monster she is," Andrea tells Oprah Winfrey.

"She would brainwash us relentlessly. We would be called up to her room, and she would sit there and drum into us, 'If you weren't a part of this family, then the family would be fine.' ... So it was more the psychological, emotional constant abuse from her that, to me, was worse than the physical abuse. Because I felt like the physical wounds could always heal, but the scars of emotional abuse have remained."

Derrick says he was never taught the difference between right and wrong. "I got in a lot of trouble with the law," he says. "I wanted nurturing so badly. I wanted my parents to love me, you know? I wanted somebody to tell me it was all right. I never got that."

Andrea says unconditional love was one of the primary things missing in their home. "We were raised in the environment that we were just so worried about stepping out of line one little inch, and we never knew what was coming or when it was coming, so we just kind of flew under the radar and didn't really live."

Andrea says she never knew what a normal family behaved like until she went over to a friend's house.

"I would ask my friend, 'You mean your parents don't beat you?'" Andrea says. "I remember her family inviting me up to a camping trip two weeks out of the summer, and it was like heaven."

Rhonda, the oldest child, says she had a different experience with her mother. She grew up before Barzee's mental decline, she says, and her mother was loving toward her. The children's biological father is the one who physically abused them, she says. "He had a couple of belts that he would use when we were younger," she says. "[My mother] didn't participate, but she never stuck up for us."

Derrick says his mother was afraid of their father too. "My mother was probably terrified," he says. "She would incur the wrath of him if she would have tried to defend us."

Andrea says she experienced physical abuse at the hands of both of her parents. "When I started standing up for my siblings, then I tended to get more of the physical abuse from both my dad and mom," she says.

In 1984, Barzee and her first husband -- the children's father -- got divorced. A year later, she married Brian David Mitchell. "I had a bad feeling about him in the very beginning," Rhonda says. "He just gave me a hug, and it was just a really creepy feeling."

Oprah.com: Why fear can save your life

Louree, who was only 8 when her parents divorced, moved in with Mitchell and her mother when she was 12.

"Brian and my mom would force me to pray with them for two to four hours a day," she says. "My mom was praying and I was kneeling there, and Brian actually nudged me and he pulled out some photos of some nude women and laid them up on the bed, and it seems that they were trying to get me to participate with them that day."

Despite the nude pictures incident, Louree says Mitchell never abused her. "There were innuendos. There were long hugs. He'd shrug up against me," she says. "I felt like if I wore a turtleneck around him that he was undressing me with his eyes."

Oprah.com: How to stop sexual abuse before it happens

The final straw for Louree came when she was 14 years old. "I asked what we were having for dinner, and my mom said chicken. During that meal, she and Brian were not touching their plates really, but they were kind of picking at a salad that they had, and she had a smile on her face the whole time," she says. "[The next day], I went to go feed my rabbit and the cage was empty, and I said, 'What happened to Peaches?' And she said, 'You had her for dinner last night.'" Louree says she moved out after that incident to escape the "mental torment."

Barzee's children say eventually she abandoned and disowned them all and they only saw her once in a while around town.

"In 1991, I heard my mom and Brian had hit the road, sold their possessions and began preaching. I guess they were trying to live a life of poverty to probably get closer to God," Derrick says. "They hung out at the bus station, at the homeless shelters, and that's where they preached."

Derrick and Rhonda both say they learned that Mitchell was suspected in the Elizabeth Smart kidnapping while watching America's Most Wanted.

"I saw him profiled and everything just clicked," he says. "All the ill feelings I had toward Brian were justified right there, and I wanted to find him. ... I was going to bring him to justice." Watching the episode, Derrick says he knew his mother must have also been involved in the crime.

Louree says she believes Mitchell and Barzee went after Elizabeth Smart to start their own cult. "Brian was very power hungry in the church, and he couldn't really get any higher and he wanted control," she says.

When asked what punishment they believe their mother deserves, Barzee's children have varying opinions.

Andrea says her mother should be put away. "I don't think she should see the light of day again," she says. "As citizen and as a mother myself, I feel like I have a responsibility to help protect children, and I don't want to see anyone else fall victim to her."

Louree says she thinks her mother will always need to be under some supervision. "My mom's been mentally sick her whole life, and now that she's getting the right medication, apparently she is holding some responsibility for herself, so I think that's a good thing," she says. "But I think she's always going need to some kind of structure or somewhere to turn to. I don't think she should be out on her own."

Derrick says he isn't sure what should happen to Barzee. "I'm not sure how I feel, if she should be locked away. ... I'm glad she's taking responsibility for what she's done," he says. "Whatever her sentence is, you know, I think that should be fair...whatever that may be."

Rhonda says she had trouble believing her mother was involved with the crime until she pled guilty. "I was closer to her, the first one, and the golden child, I guess," she says. "She taught me a lot. She did a lot of cooking and baking and homemaking. She made all of our clothes when we were little kids, and I have a different view of her [from] growing up."

These days, only Rhonda has been in communication with Barzee. "I visited her last January at the state hospital," she says.

In January, Rhonda received this letter from her mother: "Dear Rhonda, Oh how much you mean to me and the boundless love I have for you and each one of your brothers and sisters. I am so very sorry for the lives of abuse you each had to live through growing up and that you have had to live without a mother and a grandmother to your children. It is my constant prayer that each of you may find it in your heart to forgive me. Each of you are so precious to me."

Louree says the letter seems too little, too late. "It kind of makes me sick because you always want a mother to love you, and she's just never been a mother," she says. "It makes me angry that now when it's too late...usually, as children, you either get a mother or a father that love you, but we never had either."

For Derrick's entire childhood, Barzee's sickness was a taboo topic, he says. "We all knew she was sick, but she's had a lifetime of not getting help for anything," he says. "And now that she's in her 60s and she's getting help for something, there's chasms between us. How do you bridge that? How do you overcome that distance? I don't know how to do it."

Barzee's children say they have all been affected by their mother's sins in different ways. "I don't regret anything that's happened to me in my life. I respect every single incidence because it made me who I am and the kind of mother I am," Louree says. "I know what not to be, so it's made me stronger in that sense and very close with my children."

Despite all her mother's wrongdoings, Louree says she does not worry about becoming like their mother. "I've educated myself pretty well in the psychological department and I've studied a lot of mental illnesses, and I think just like if you have cancer that runs through your family, you have to be aware of it."

Derrick says he has had to learn to take responsibility for himself. "I had to look back and say, 'I was on the wrong path.' Like she went down," he says. "Once I figured out that I had to own my mistakes, it was a whole new world for me. I realized I couldn't be a victim of my circumstance anymore."