Are there dangers in being 'spiritual but not religious'? 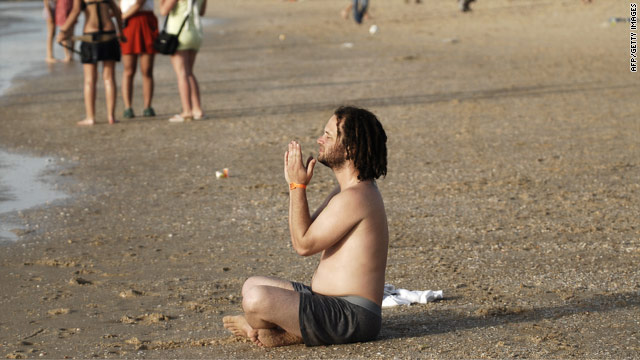 Being "spiritual but not religious" means you do not need a church or a community, some say. A beach will do.
STORY HIGHLIGHTS

It's a trendy phrase people often use to describe their belief that they don't need organized religion to live a life of faith.

But for Jesuit priest James Martin, the phrase also hints at something else: egotism.

"Being spiritual but not religious can lead to complacency and self-centeredness," says Martin, an editor at America, a national Catholic magazine based in New York City. "If it's just you and God in your room, and a religious community makes no demands on you, why help the poor?"

Religious debates erupt over everything from doctrine to fashion. Martin has jumped into a running debate over the "I'm spiritual but not religious" phrase.

The "I'm spiritual but not religious" community is growing so much that one pastor compared it to a movement. In a 2009 survey by the research firm LifeWay Christian Resources, 72 percent of millennials (18- to 29-year-olds) said they're "more spiritual than religious." The phrase is now so commonplace that it's spawned its own acronym ("I'm SBNR") and Facebook page: SBNR.org.

But what exactly does being "spiritual but not religious" mean, and could there be hidden dangers in living such a life?

Did you choose "Burger King Spirituality"?

Heather Cariou, a New York City-based author who calls herself spiritual instead of religious, doesn't think so. She's adopted a spirituality that blends Buddhism, Judaism and other beliefs.

"I don't need to define myself to any community by putting myself in a box labeled Baptist, or Catholic, or Muslim," she says. "When I die, I believe all my accounting will be done to God, and that when I enter the eternal realm, I will not walk though a door with a label on it."

People seem not to have the time nor the energy or interest to delve deeply into any one faith or religious tradition.
--June-Ann Greeley, theology professor
RELATED TOPICS

Gallagher tells a parable to illustrate her point:

"God and the devil were walking down a path one day when God spotted something sparkling by the side of the path. He picked it up and held it in the palm of his hand.

Gallagher says there's nothing wrong with people blending insights from different faith traditions to create what she calls a "Burger King Spirituality -- have it your way."

She disputes the notion that spiritual people shun being accountable to a community.

"Twelve-step people have a brilliant spiritual community that avoids all the pitfalls of organized religion," says Gallagher, author of "The Best Way Out is Always Through."

"Each recovering addict has a 'god of our own understanding,' and there are no priests or intermediaries between you and your god. It's a spiritual community that works.''

Nazli Ekim, who works in public relations in New York City, says calling herself spiritual instead of religious is her way of taking responsibility for herself.

Ekim was born in a Muslim family and raised in Istanbul, Turkey. She prayed to Allah every night, until she was 13 and had to take religion classes in high school.Then one day, she says she had to take charge of her own beliefs.

"I had this revelation that I bow to no one, and I've been spiritually a much happier person," says Ekim, who describers herself now as a Taoist, a religious practice from ancient China that emphasizes the unity of humanity and the universe.

"I make my own mistakes and take responsibility for them. I've lied, cheated, hurt people -- sometimes on purpose. Did I ever think I will burn in hell for all eternity? I didn't. Did I feel bad and made up for my mistakes? I certainly did, but not out of fear of God."

Going on a spiritual walkabout

The debate over being spiritual rather than religious is not just about semantics. It's about survival.

Numerous surveys show the number of Americans who do not identify themselves as religious has been increasing and likely will continue to grow.

A 2008 survey conducted by Trinity College in Hartford, Connecticut, dubbed these Americans who don't identify with any religion as "Nones."

"I don't need to define myself in a box labeled Baptist, or Catholic, or Muslim."
--Heather Cariou, a spiritual but not religious seeker

Seminaries, churches, mosques and other institutions will struggle for survival if they don't somehow convince future generations that being religious isn't so bad after all, religion scholars warn.

Jennifer Walters, dean of religious life at Smith College in Massachusetts, says there's a lot of good in old-time religion.

Religious communities excel at caring for members in difficult times, encouraging members to serve others and teaching religious practices that have been tested and wrestled with for centuries, Walters says.

"Hymn-singing, forms of prayer and worship, teachings about social justice and forgiveness -- all these things are valuable elements of religious wisdom," Walters says. "Piecing it together by yourself can be done, but with great difficulty."

Being a spiritual Lone Ranger fits the tenor of our times, says June-Ann Greeley, a theology and philosophy professor.

"Religion demands that we accord to human existence some absolutes and eternal truths, and in a post-modern culture, that becomes all but impossible," says Greeley, who teaches at Sacred Heart University in Connecticut.

It's much easier for "spiritual" people to go on "spiritual walkabouts," Greeley says.

"People seem not to have the time nor the energy or interest to delve deeply into any one faith or religious tradition," Greeley says. "So they move through, collecting ideas and practices and tenets that most appeal to the self, but making no connections to groups or communities."

Being spiritual instead of religious may sound sophisticated, but the choice may ultimately come down to egotism, says Martin, the Jesuit priest, who writes about the phrase in his book, "The Jesuit Guide to (Almost Everything)."

"Religion is hard," he says. "Sometimes it's just too much work. People don't feel like it. I have better things to do with my time. It's plain old laziness."