Jerry Seinfeld wants to save your marriage 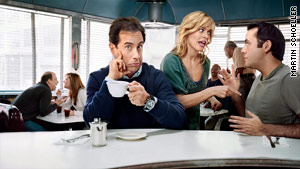 (OPRAH.com) -- Slouching over coffee in a booth at a New York diner, Jerry Seinfeld looks so...Seinfeldian, you might think he was shooting a scene from the old sitcom.

But this is a different Jerry: a husband and father of three, who, at 55, finds himself comfortably bemused by the strange intricacies of marriage.

It's his current obsession and the subject of the new show he's coproducing, "The Marriage Ref" -- a stand-up/reality-TV hybrid that features clips of real couples in real tussles, plus a panel of celebrity "experts" and a referee (comedian Tom Papa) who ultimately declares the husband or wife in each standoff the winner.

If you've seen the show, you already know that the niggling mundanity of other people's lives provides its share of laughs, yet Seinfeld is expecting even more.

"I hope it's not grandiose to say, but maybe it'll save a marriage here and there," he explains. "I gotta believe that somewhere, someone out there is going to go, 'I'm not the only one!'"

Lucy Kaylin: This is a pretty big topic you're taking on.

Jerry Seinfeld: I feel like Jacques Cousteau, frankly. I feel like the first person to explore the ocean. And we're just gonna go out and search and --

JS: Spelunking is for caves. I'm talking about oceanography. Caves are small; the ocean is vast. In the comedy business, you deal with scarcity all the time. You never have enough funny things.

But in this show, it's the exact opposite. You talk about, What's a great sitcom? What's a great romantic comedy premise? Well, here it is: Here's a man and here's a woman, and they have decided to shackle themselves together. Let's see how that works out.

LK: Tell me about the spat between you and your wife, Jessica, that prompted the idea for The Marriage Ref.

JS: A friend of hers was over. I don't even know what it was about, but we got into something. And the friend started to get uncomfortable and said, "Maybe I should go." And I hit upon the idea of, "No, you have to stay. You have to solve this for me." And we each pleaded our case.

JS: Well, it wasn't me. But the simplicity of it was exciting.

LK: Do you think there should be ground rules for marital fights?

JS: The best piece of advice I received before I got married was, "Be careful what you say when you're in a fight, because it could stick in someone's head." I don't think I've ever said anything I really regretted. I'm very sympathetic to women. I've really studied wife-ology, and I know you've got to figure out the feelings. Deal with the feelings.

LK: So what's your fighting style?

JS: I can get very lawyerly when my wife and I get into a thing. I get very logical and I try and channel my emotion through that.

JS: If you're a man, you have to figure out what she needs to hear. So ask her: "What do you need to hear me say?" And then just say it. That's a very good way out of an argument.

LK: Any other ground rules?

JS: I'm very big on staying in the room. In fact, I said this to my wife the other day: "I understand that you're so upset that you just want to walk away. But, you know, I don't care that it's hard." You stay in the room until you feel better. Then you can leave.

LK: How about the classic, "Don't go to bed angry"?

JS: I remember agreeing to that on the night of our wedding. I don't think we've kept it once.

Oprah.com: What's wrong with being angry?

LK: So monogamy -- is it natural? Something we ought to aspire to?

JS: My personal viewpoint is this: The problem with humans is our heads are just way too big. And one of the greatest appeals of monogamy is the simplification of the mental process.

I don't have any friends who aren't faithful to their wives, but if I did, my main question would be, "Who's got time to figure all that out?" It's just too much work. The emotions that have to be disposed of, the values, the ethics.... All I see is this gigantic amount of work for a fleeting pleasure.

People should get married because they have finally seen the folly of being single: "Oh, this is all just kind of a bad magic trick. I just keep bending over to reach for this wallet on a string. How much longer am I gonna do that?"

LK: What's one of the things you most like about being married?

LK: And your wife is good at that?

JS: Yes. Yes. Yes, she is. I feel like humor is the answer to everything. For example, let's look at David Letterman and Tiger Woods. Now, there are some differences to the two situations.

If you have a little bit of humor in the shaker and you can sprinkle that on, that's your answer.

LK: So ultimately, is marriage worth it? Or is it the most foolhardy thing we could do?

JS: No more foolhardy than "I think I'll take human form for 75 years and try to negotiate the planet I see below me."

There's a tremendous power and energy in sharing your life with another person. I'm married ten years next week, and it's as big a joy for me now as it was when we first started dating. I love these two puzzle pieces that don't quite fit, you know? Somehow you make them fit.