By Nikki Dowling, The Frisky 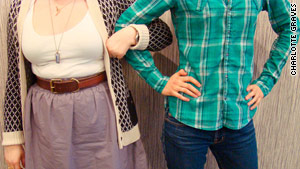 There are too many stereotypes about how lesbians think and behave, columnist says.
STORY HIGHLIGHTS

(The Frisky) -- There are a lot of misconceptions about lesbians. I'm confronted with them daily and, frankly, hearing this stuff is like getting smacked in the face with a wet rag.

Usually, when someone fires off a stereotype, I am so shocked that I just stand there, staring, opening and closing my mouth like a big, dumb goldfish.

So I'm going to take this opportunity to get up on my soapbox and stamp out all the stupid, ignorant misconceptions I have heard over the years. Hopefully, next time I hear one of these things I can eloquently explain why it's untrue rather than just stammering, "What!? Jerk!"

Lesbians hate men. Actually, I find that often the opposite is true. A lot of gay women I know have a ton of guy friends and find that they get along with dudes as well as with chicks. I like checking out girls and my straight lady friends aren't so interested in doing that. I feel very comfortable with my guy friends because they don't care about how I look and don't gossip to nearly the same degree. That said, I am very, very close to some of my female friends. There is definitely a very special bond between people of the same gender.

Being gay is easier than being straight because you're dating someone who is the same gender as you. I wish this were true, but it isn't. Guys complain that girls are impossible to figure out and I agree. I don't understand my own emotions and feelings half the time, let alone another woman's. Oh yeah, and if you think having sex with someone who has the same parts as you is easier, you're wrong there too. You know how it's easy to put mascara on yourself but not on someone else? Yeah, it's kind of like that.

There is always a "man" and a "woman" in lesbian relationships. Nope. My girlfriend and I both happen to be pretty feminine. I have seen lesbian couples where both women are on the masculine side, too. Believe it or not, lesbians care a lot about personality, just like straight couples. We don't just go around trying to fill a gender deficiency. Who we are attracted to doesn't have a whole lot to do with how we ourselves look. Rather, it has to do with ... who we are attracted to. Wow, what a concept!

The Frisky: The power of first loves

Lesbians have daddy issues or were sexually abused as kids. Puhleeasee! My sexual preference has nothing to do with trauma or some kind of damage that happened to me as a child. Imagine, for a moment, what this conversation would look like if it went the opposite way. Straight woman: I'm straight. Lesbian: Ooooh! Do you have a really bad relationship with your mother?! Straight woman: No. Lesbian: Well, you must have been sexually abused by a big, mean lesbian as a child. Ridiculous, isn't it?

If you are a lesbian you've never had a meaningful relationship or been in love with a man. This is a hard one to make people believe, but it isn't true. When I was younger, I identified as bisexual and had a three-year relationship with a man whom I loved a lot. A few years after we broke up, I realized I couldn't date or sleep with men anymore because I didn't feel sexually attracted to them. Things change, OK? A woman who has a relationship with a woman is free to identify as straight when the relationship ends, so why can't I do the opposite?

The Frisky: 8 signs you should unfriend someone on Facebook

Lesbians get committed really fast and don't cheat. The old joke that a lesbian's second date is renting a U-Haul is stupid. Like straight couples, some become a "we" very fast, and some don't. Oh yeah, and you know how promiscuity happens in some hetero relationships and not in others? Surprise! That also happens with homosexual couples. Let's stop stereotyping women as commitment-obsessed, clingy crazies, OK?

The Frisky: Social media's a stage, we're all players

It's just a phase. Roar! Nothing incites rage in me like the old it's-just-a-phase crap. When I was straight, no one told me it was just a phase. Like a lot of these other misconceptions, you wouldn't say it to a straight person, so don't say it to me. It's hurtful and offensive because tons of thought, anguish and emotion went in to figuring out my sexuality. To dismiss it as a phase is also to say I wasted months of my life thinking about something that isn't real.