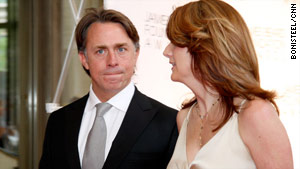 John Besh and his wife, Jenifer, arrive at the James Beard Awards in New York on May 3.
STORY HIGHLIGHTS

(CNN) -- Food fanatics may recognize John Besh from his stints on TV shows like "The Next Iron Chef" and "Top Chef Masters," but New Orleans residents know the Louisiana-raised chef and ex-Marine as an evangelist for local food culture.

After Hurricane Katrina devastated his city in 2005, Besh rallied the teams at his flagship restaurant August to feed the Police Department, National Guard troops, evacuees, refugees and medical personnel. He also set up field kitchens for rural parish residents after hurricanes Gustav and Ike in 2008.

Besh's 2009 love letter to his city's distinctive cuisine, a nearly 400-page volume of recipes, photographs, stories and field guides to local ingredients entitled "My New Orleans" was recently named best cookbook of the year by the International Association of Culinary Professionals.

With his region's foodways again in peril, Besh spoke with CNN about what's at risk from the Gulf Coast oil spill and what U.S. eaters can do to help.

CNN: From a food perspective, what's at stake?

John Besh: We have a rig that's about 45 miles off the southern tip of Louisiana -- that little bit of land that just happens to be some of the most incredibly rich marshland, which feeds an enormous ecosystem. So, some of the most fragile land on the face of the earth -- at least in North America.

Two-thirds of the production of seafood from the lower 48 states comes from this ecosystem. It all begins with the micro-organisms in the marsh grasses at the mouth of the Mississippi River.

There are other rivers there, too, but it's the mighty Mississippi that feeds it all. We have to act swiftly, as if we were going to war. We have to protect this coastline. There are not just jobs; there are communities and cultures.

CNN: How will this affect the local economy -- especially the shrimpers?

Besh: One thing in particular that's been a real slap in the face to the American shrimper is the rapid importation, unchecked, of foreign shrimp flooding our market. We don't know what waters they come from, we don't know what they were fed.

We really know very little about their origin. Yet we accept them with open arms in our country -- a lot of time using slave labor to process these things that we're feeding our children and eating in our massive chain restaurants.

These shrimpers, these communities have been through hurricane after hurricane. They really got back on their feet themselves -- very resilient people.

And now we're dragging our feet -- this slow, very delayed response to the waters. We're talking about this ecosystem that's a source, that's a $2.9 billion a year industry just in our region for shrimp and oysters and crab -- along with some fin fish production. This whole industry [is] on the verge of collapse if we do not act swiftly.

CNN: What can Americans outside the Gulf Coast do to help?

Besh: We need people to really be unified about this. It's more than just about a job. Because it's really about a culture. We need to preserve our environment.

[President] Obama was put in office for the very things he claims to have espoused, yet now we're seeing that administration really dragging their feet with this one -- and that's a huge shock to all of us.

And that's why we're asking everybody out there -- call your representatives, call your senator, call whoever. Make noise.

One thing you can do right now is eat American shrimp.

CNN: How can diners make sure it's domestic?

CNN: What can chefs do?

Besh: Chefs should be very mindful of the origin of their seafood. We still have a lot to work on. We have a lot to clean up. But perhaps we can still salvage that culture and the industry. Not to mention all the environmental effects.

CNN: What are you doing at your own restaurants like August, La Provence and Lüke?

Besh: We're focused on supporting oyster families -- like P&J Oysters -- and local shrimpers by buying from our shore -- at least stabilizing as best we can the few people who are out there and able to make a living at it.

And we have an active feeding arrangement going on. We're taking food down to the mouth of the river when the mitigation stabilizes.

CNN: What does the future hold for Gulf Coast cuisine in light of this disaster?

Besh: We have no idea what we're dealing with yet because BP tells us one thing, the government tells us another. Even those reports have been skewed -- it may be up to five times worse than what our government is even saying. Right now, there's just this big question and our question is not to cast blame right now. Let's just deal with it.

Let's bring in all of our resources -- the Department of Defense if need be -- because we're an incredible country. We can do so much.

I love America and I'm not against oil. But we've got to figure out how to handle crises like this before they become crises. That's my plea to everybody. Get out there and get involved. Make it known that we've got to save the Gulf.