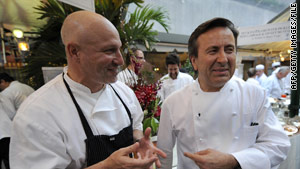 New York (CNN) -- There are some very happy chefs and restaurateurs, cookbook authors, food journalists and other outstanding names in food and drink.

They are the latest winners of the James Beard Foundation Awards, which are often referred to as the Oscars of the food world. The ceremony was held at New York's Lincoln Center on Monday night.

The awards were established in 1990 by the nonprofit that bears the name of one of America's founding food writers and cooks.

Although the journalism, media and cookbook categories call for self-nomination (and an entry fee), anyone can suggest a chef or restaurant via the foundation's Web site, jamesbeard.org, during an open call in the fall.

Though there is no cash reward, a win -- or even a nomination -- can substantially increase the buzz for business, according to foundation President Susan Ungaro.

Below are this year's winners:

Rising Star Chef of the Year Award
Timothy Hollingsworth of the French Laundry in Yountville, California

Beverage
"Been Doon So Long" by Randall Grahm

International
"The Country Cooking of Ireland" by Colman Andrews

Writing and Literature
"Save the Deli" by David Sax

Reporting on Health, Environment, or Nutrition
Rowan Jacobsen, EatingWell, "Or Not to Bee"