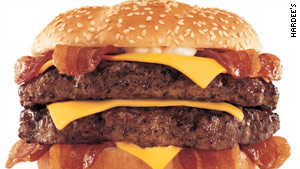 Hardee's Monster Thickburger is for serious diners who have room for 1,420 calories.
STORY HIGHLIGHTS
RELATED TOPICS

(CNN) -- When it comes to fast food, the big chains can't help going over the top.

April brought consumers the Double Down heard around the world -- a bunless bomb o' meat from KFC touting the slogan "It's real."

Bloggers taste-tested it, The New York Times's restaurant critic reviewed it, it was a top trending topic Twitter alongside the likes of Justin Bieber - and after two weeks, did the company's Double Down wager pay off?

The stakes are high indeed, especially after KFC's sales fell 5.8 percent in 2009, according to food industry research firm, Technomic.

"It [the Double Down] continues to generate a tremendous amount of online buzz, from videotaped taste tests on YouTube to real-time, in-store reviews via Twitter. If social media is an indication, the Double Down is developing quite a cult following." Maynard said.

But does the adage "any publicity is good publicity" hold true?

"Stunt food has been a part of restaurant life probably since the first time a chef put a napkin over a customer's head in order to serve him a whole, rare, roasted ortolan," (a legendarily decadent meal of a fatty bird, bones and all) wrote Sam Sifton, The New York Times restaurant critic.

If the past is any indicator, the Evil Knievels of the fast food realm have worked. Though their calorie count is a lot more Evil than Knievel.

For Hardee's, the sales for the fast food chain have risen steadily since it found its niche in behemoth burgers. The Monster Thickburger produced an 8 percent growth in sales during its first year alone.

"And I have to give KFC credit for doing something to get rid of all that grilled chicken," said Jenna Petroff, public relations and social media manager of Hardee's Food Systems.

"Oh, and we've been doing that non-bread-as-a-carrier-thing since 2003 with the Low Carb Thickburger and Low Carb Six Dollar Burger." Lettuce replaces the bun in these creations.

In 2005, Burger King went against the fast food industry trend of offering more healthy choices by introducing the Enormous Omelet Sandwich -- two eggs, two slices of cheese and three slices of bacon and sausage on a large bun.

The 760-calorie no-utensils-required meal helped increase Burger King's breakfast sales by 20 percent. The sandwich has since been discontinued in United States stores.

Though these successes contain one thing the Double Down is fairly modest in: calorie count.

The Double Down weighs in at 540 calories, 32 grams of fat, and 1,380 milligrams of sodium. While that's still well over half the average adult's recommended recommended daily allowance of sodium and nearly half a day's fat intake, it's practically a novelty compared to other chains' dietary assaults.

According to Advertising Age, this type of product could muddy KFC's image after the chain heavily promoted the ostensibly healthful release of its grilled chicken in 2009 and most recently, its "Buckets for the Cure" affiliation with cancer-fighting charity powerhouse, the Susan G. Komen Foundation.

"The series of stunts drove buzz and the introduction of grilled chicken spiked short-term sales, the moves also contributed to a lack of consistent brand positioning and a distraction from KFC's flagship product -- both of which have hurt the chain," said Emily Bryson York.

Despite the buzz, the Double Down is still planned for a limited time only release -- through May 23.