It's meatless Monday for some 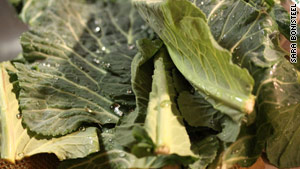 There is a movement to eat more vegetables and no meat on Mondays.
STORY HIGHLIGHTS
RELATED TOPICS

(CNN) -- If you find yourself asking "where's the beef?" you may have a case of the Mondays.

Meatless Monday is an increasingly popular movement in which carnivores cut out meat one day a week for health and environmental reasons.

The campaign started in 2003 as a nonprofit public health initiative of The Monday Campaigns, in association with the Johns Hopkins Bloomberg School of Public Health and the Johns Hopkins Center for a Livable Future in Baltimore, Maryland.

But aside from the alliteration, why meatless and why Monday?

"Studies suggest we are more likely to maintain behaviors begun on Monday throughout the week," according to the Healthy Monday public health campaign.

"You certainly don't need to eat meat to get protein. Meat is an important part of your diet, but you don't need to eat it every day of the week," Ralph Logiscli, director of the Healthy Monday Project, told CNN.

There are vocal critics.

When Baltimore City Public Schools adopted Meatless Mondays last year as a way to cut costs, conservative commentator Glenn Beck deemed it an indoctrination of children to vegetarianism and veganism and decried it as an over-extension of governmental control.

"Americans love our steaks, we love our chops, we love our burgers, and you'll throw me in jail, my last meal will be a giant steak," Beck said.

J. Patrick Boyle, president and CEO of the American Meat Institute, wrote the movement was "depriving children and their parents of the ability to determine what is appropriate for their diets and their own personal circumstances."

The concept of Meatless Monday is not new. During World War I, the U.S. Food Administration called for "Meatless Mondays" and "Wheatless Wednesdays" to aid war effort. It told the public that "Food Will Win the War" though the effort to reserve food to be shipped to American servicemen abroad.

The rise of the meatless movement during the past year is speculated to be part of the "Oprah Effect" and has drawn some major celebrity supporters.

Food activist and author of "The Omnivore's Dilemma," Michael Pollan, announced on "The Oprah Winfrey Show" in April 2009 that he participates in the phenomenon and urged viewers to do so.

"To the extent we push meat a little bit to the side and move vegetables to the center of our diet, we're also going to be a lot healthier," he said.

In June 2009, even a Beatle got in on the "all you need is vegetables" action.

Sir Paul McCartney and his daughters, Stella and Mary, launched Meat Free Monday in the United Kingdom to raise awareness about the climate-changing effects of meat production and consumption.

"Having one designated meat-free day a week is actually a meaningful change that everyone can make, that goes to the heart of several important political, environmental and ethical issues all at once," Paul McCartney, a long-outspoken vegetarian, said.

"For instance it not only addresses pollution, but better health, the ethical treatment of animals, global hunger and community and political activism."

It's not just the glitterati getting in on the action; entire cities are promoting a weekly meat hiatus.

San Francisco, the home of local food evangelists such as chef Alice Waters, became the first official Meatless Monday city in the United States on April 7. The city's Board of Supervisors approved a resolution pushing for more vegetarian offerings on Mondays, without requiring them.

Whether Meatless Mondays prove in the long run to have any palpable effect on the environment or individual health as Earth Day celebrates its 40th anniversary, it's certainly food for thought.