Chef steps up to plate to fuel favorite team 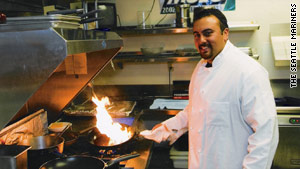 (CNN) -- The stadium lights are on, the outfield is mowed, and the beer taps are primed for their first pour. The Major League Baseball regular season is about to begin.

It's so close, you can taste it -- and it's not all peanuts and Cracker Jacks.

Each of the 30 teams in the league has a clubhouse chef fueling the players, preparing meals for the home and away teams during the season.

Jeremy Bryant, 37, who describes himself as a die-hard Seattle Mariners fan and "the one starting the wave," is the clubhouse chef for the Mariners. But the way he got the gig required a few extra practice swings.

More than a decade ago, Bryant and a few buddies made their way to the clubhouse after the game to seek out players' autographs. What he found instead was a revolting spread of food.

"No way, I couldn't believe my heroes were eating food like this," recalled Bryant, a graduate of the Culinary Arts Program at South Seattle Community College.

As he quickly found out, fans weren't technically allowed into the clubhouse without proper credentials. As Bryant was escorted out, he passed Scott Gilbert, the clubhouse manager, and took his shot, handing Gilbert his business card.

"If you leave me alone, I'll let you cook dinner," Gilbert finally told Bryant right before the demolition of the old Kingdome stadium.

It was finally the young chef's turn to step up to the plate.

He maxed out his credit card, preparing steak and lobster and even bringing out an ice sculpture.

After that dinner, the Mariners hired Bryant. He's now in his 11th season and watches every home game at Safeco Field on an 8-inch television in the clubhouse kitchen.

Bryant cooks not only for the big hitters but for the umpires, the wives and the kids, usually 60 to 70 people a game. His off-season catering company, New Century Catering, cooks for the visiting teams at Safeco Field.

Albeit a chef, Bryant is first and foremost a fan. And like any devoted baseball enthusiast, Bryant doesn't dismiss the superstitions that have long intertwined with the national pastime.

There's the Curse of the Bambino and those players who don't step on the foul line on the way to bat, but have you heard the one about Ichiro Suzuki and the wings?

Suzuki, a native of Japan, came to play for the Mariners in 2001. In an effort to bring the cuisine of Japan to the home field, Bryant served Japanese chicken wings to the player on one of his first days. Suzuki went on to have an incredible year, ultimately being named Most Valuable Player.

Suzuki now eats those wings at 5:05 p.m., on the same plate, from the same pan, every single game.

Ken Griffey Jr. fancies a nice juicy steak, and Jose Lopez prefers fettucine alfredo -- that is, until the nutritionist came along two years ago, forcing players to eat more healthily.

Bryant's beloved deep fryer struck out, though he admits he occasionally trafficks a corn dog from the stadium for player who wishes to remain anonymous.

When word spread that the first item blacklisted by the nutritionist was dark-meat chicken, Bryant's cell phone rang. It was one of the overlords at the Mariners: "Ichiro gets 200 hits a year, so he eats whatever he wants."

For now, Suzuki still gets his plate of teriyaki wings at 5:05.

(The Mariners open the season against the Oakland Athletics on April 5 at Oakland-Alameda County Coliseum.)